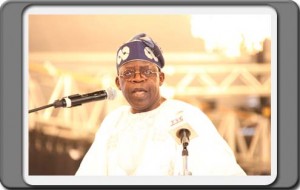 The National leader of the All Progressives Congress, APC, Asiwaju Bola Tinubu has accused the Independent National Electoral Commission, INEC of colluding with President Goodluck Jonathan to rig election in Lagos State.

Tinubu, at a news conference on Saturday at the APC Lagos Secretariat, Acme Road, Ogba, in Lagos, Southwest Nigeria described the Permanent Voters Card collection exercise in Lagos as a colossal failure deliberately perpetrated by INEC and the presidency to rig election in Lagos next year.

He said despite the fact that INEC had four years to prepare for the forthcoming election, the umpire had shown that it was not ready to conduct a free and fair election with the shaddy manner it is handling the PVC distribution in Lagos.

“This exercise is not acceptable. INEC is colluding with the presidency to rig the forthcoming election. This is a deliberate collusion as far as I am concern. It is inexcusable. INEC has merged with Jonathan to form a formidable rigging body. We will stand to protect our rights,” he said.

“According to Tinubu, “in 2011, a total of 6,247,845 people registered. Surprisingly, the recent figure claimed by INEC had whittled that figure down to 4.8 million. The reasons for this sudden and steep drop are shrouded in mystery and suspicion due to lack of INEC’s transparency.

“Polling units whose registered voters have been reduced to zero are on the increase and the number of such empty units now stands at a staggering 1,801 million. The question INEC needs to answer is how did all these names get wiped down to such zero?

“It boggles the mind that in a densely populated and politically active state such as Lagos, there can be so many units with no registered voters at all. This bellied the recent history of voting in Lagos. It makes no logival sense.”

The former governor lamented that INEC had the time to give Nigeria acceptable biometric PVC, but failed in a common exercise that Ghana and Kenya did successfully, saying that INEC was not forced to give a date to Lagos on the PVC distribution, only to turn back 48 hours to the distribution that only 11 Local Governments, out of 20 in Lagos will get the PVC.

“They told us that only 11 Local Government is ready and rather than outright boycott, the party endured the frustration and asked the public, especially APC members to go for it. Our reports from the field so far showed that the exercise has failed and unacceptable. In some instance, you don’t find INEC starting on time, the cards were not sorted out and were inadequate,” he decried.

Tinubu said even in the 11 LGs, there is so much confusion and disorganisation in the distribution such that by the second day of the exercise, just 20 percent had received their PVCs, saying “We must also query INEC as to what percentage of total registered voters the 11 LGs constitute.”

He lamented that INEC had set in motion a process dripping in doubt and susceptible to fraud and manipulation, adding that one is forced to believe that INEC was not this incompetent but that it now acted in direct collusion with the ruling PDP to disenfranchise eligible voters and rig the elections.

“Going by this shoddy and disorganised and unreliable method of distributing the PVCs in the 11 Local Governments, INEC has shown its hands. They are unclean. There is no way it will not appear to any reasonable person or analytical mind that there is something amiss. There is no assurance that INEC will correct the anomalies in Lagos and be able to register those omitted and new eligible voter.

“We suspect that some elements are working in cahoots with the ruling party to deliberately bungle the exercise in order to favour the ruling party. INEC has done nothing but a trial run in Lagos. We adjudge this exercise a failure,” Tinubu stated.

Tinubu insisted that INEC must publish the list of about 1.8 million voters omitted from the Lagos registered, saying that the umpire body was not a court of law to disenfranchise Lagosians.

He said there was no way INEC could meet the 30 days deadline provided by the Electoral Act to public the names of all registered voters before the elections in February 2015.

Only The National Leadership Can Publish PDP Primaries’ Results – Metuh