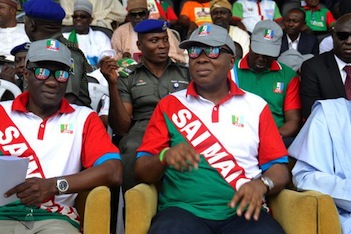 Kwara state appears set for the 2015 elections following the formal declaration of Governor Abdulfatah Ahmed to run for second term in office.

The ceremony which held in Ilorin, the Kwara state capital attracted a massive crowd of supporters as well as chieftains of the All Progressives Congress, (APC) from both the federal, state and local levels.

Ahmed recounted his administration’s achievements, noting that “in line with our commitment to continuity, we have leveraged on Shonga Farm experience and created a new generation of farmers, provided more food to our people and enhanced livelihoods through agri-business with the provision of 215 million naira involving micro-credit to out-grower farmers across the whole state”.

He further noted that he was not out to seek praise for doing his job but wanted another chance to do more for the people of Kwara state.

Continue With Saraki Dynasty, Vote Out Jonathan For Nigeria To Progress – Speaker Tambuwal