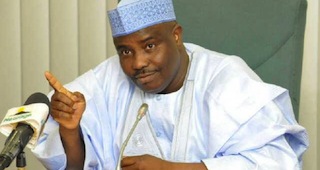 Over 80 lawmakers were at the All Progressives Congress (APC) secretariat on Monday for a consultative session with party executives.

More than 80 lawmakers, including the Speaker of the House of Representatives, Hon. Aminu Tambuwal, had a closed door meeting with APC leaders.

Addressing Journalists at the end of the meeting at about 9:15, the National Publicity Secretary of APC, Alhaji Lai Mohammed said they met to deliberate on the Speaker’s matter and the forthcoming convention of the party.

He said: “We met to deliberate on the issue of the Speaker, Rt. Hon. Aminu Tambuwal especially the rough tackles that the PDP led federal government is leveling. But the ground has been softened before the meeting by the ruling of Justice Mohammed who asked that status quo be maintained and that the House cannot reconvene until November 7 when the parties are before him.

“What we did after was to take briefings from all the members and the party in respect of our coming convention and primaries. That is the sum total of our discussions.

Speaker, Tambuwal who also spoke, hailed the court who ordered that status be maintained on the resumption of the House until Friday.
He added that the matter was not about him as an individual but the National Assembly.

“Well, I expected nothing less from the Nigerian judiciary that has over time proven to be judicious…well I think I don’t have to comment on that. Let me avoid that. But I have this to say that this is not about me. It is about the institution of the National Assembly.”

Before? the closed door session, the APC Chairman, Chief John Odigie-Oyegun, said he was delighted to host the Speaker for the first time at the national level.

Describing Tambuwal as an exceptional bridge builder, Odigie-Oyegun said he was impressed at the way the Speaker’s colleagues heralded his coming each time.

“This is the first meeting at the national level that I’m having the pleasure of hosting you as a member of the APC.

“It’s a measure of the mind when your own colleagues treat you like this?. You’re an exceptional bridge builder.

“You constructed a coalition for peace among your colleagues as soon as you became Speaker?.”

The APC chairman said the party had an infusion of adrenaline and Tambuwal’s arrival brought the latest infusion.

Buhari Tells Supporters, ‘It Was El-rufai Who Prevailed On Me To Run For President’ GMB Begs Kaduna

Jonathan Directs PDP Lawmakers To Ensure That Tambuwal Is Removed