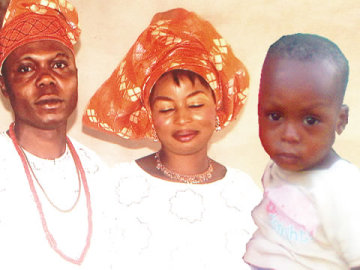 From killing bus drivers over the refusal to “drop” 20 naira only. Nigerian Police officers now attack their immediate family members over money dispute, like they say, a police officer never jokes with his money.

Here’s a story put together by Nigeria’s PUNCH Newspaper where a police corporal, Lucky Ikharia, on October 30, allegedly used a bus to crush the legs of his wife, Dupe. Having left her for dead, Lucky went home where he allegedly stabbed his baby, David, to death, ripping out the toddler’s intestines.

Still in a rage, the policeman turned the knife on himself in an attempt to take his own life. Lucky like his name who was lucky to have survived along with his wife were however in a critical condition.

It was reported that four days prior to the incident, 34-year-old Lucky, who hails from Sabon Gida Ora, Edo State, had a quarrel with his wife, Dupe over N2,000, after which he reportedly sent her packing.

The policeman, who is attached to the Makinde Police Division, Oshodi, Lagos had also ‘seized’ their only child from Dupe as a means of ‘punishing’ her.

PUNCH learnt that around 8pm on the day of the attack, Dupe, a 30-year-old indigene of Abeokuta, Ogun State, was heading for her mother’s house in Mushin unknown to her that Lucky was waiting in a bus to attack her.

It was learnt that on getting to Olorunshogo junction, Lucky pursued his wife with the bus, crushing her legs in the process.

Leaving her for dead, Lucky was said to have fled the scene while passersby initially thought the attack was random.

However, after Dupe was rushed to a nearby hospital on same evening for treatment and had regained consciousness the following morning, she explained that the man who drove the bus which crushed her legs was her own husband.

Unknown to Dupe, after her husband attacked her, he reportedly drove back to their apartment where he stabbed their child, David, in the belly, before fleeing the residence.

Our correspondent learnt that Lucky’s co-tenants and Dupe’s relatives who discovered the baby’s corpse on Friday morning, reported the incident at the Akinpelu Police Division. It was also gathered that the knife and the bus had both been recovered.

When PUNCH visited the hospital where Dupe was receiving treatment on Monday, the woman, who could hardly speak. She said the cause of the fight was a sum of N2000 which Lucky claimed she stole.

She said, “We got married and started living together around October 2013. We usually had quarrels and that was not the first time he would beat me up, and send me out of the house. But this incident started on Sunday, October 26. Lucky had initially kept N15,000 with me.

“Then, on Sunday, he collected N5, 000 to repair the bus. Later I gave him the rest, only to realise it was N8, 000. So, he began to question where I kept the remaining N2000. But I knew that it was his nature to stir up trouble because he had a habit of keeping money with me and going again to take it.

“So, we began to fight, and he asked me to leave the house. He did not allow me to take the child with me that day. I was sleeping in friends’ places until Thursday when I decided to go back home. I did not find my baby, and when I asked him, he threatened that if he met me in the house by evening, he would kill me, kill the baby and himself.”

Dupe said she was then called by her mother to come to their family house in Mushin, adding that as she got on her way, and was at the Olorunshogo junction, a commercial bus swerved to her path and hit her several times.

She said, “The commercial bus was his bus. He was the only man inside. He hit me and I fell. Then he reversed and came over my legs again. I lost consciousness. That was the last thing I knew.”

PUNCH learnt from one of the nurses that Dupe might be admitted in the hospital for about two months and might spend over N600,000 for treatment owing to the severity of the attack.

One of Dupe’s relatives, Mr. Segun Akiode, told our correspondent that the family had yet to inform Dupe of her son’s death. He added that the family also did not know Lucky’s whereabouts.

He said, “I was called on the phone on Thursday evening that my sister was knocked down at Olorunshogo junction. When I got there, I met her in a pool of blood. So, we rushed her to a hospital. It was already around 9.30pm.

“On Friday, when we went to their apartment, we found the baby boy, stabbed in the belly and already dead on the floor. We have not told Dupe about his death yet. So, we went to report at the Akinpelu Police Division, and we were asked to describe the bus which hit Dupe. When we did, they said the bus was with them in the station, but the whereabouts of Lucky were still unknown.”

When our correspondent got to the couple’s rented apartment in Kale Close, Mafoluku, it was learnt from neighbours that Lucky had not been seen at home since the day of incident.

At the Makinde Division, a police source told our correspondent that the suspect was one of the patrol van drivers, but he had not come to work since the day of the incident.

The source added that Lucky, who was believed to have also stabbed himself, was in an undisclosed hospital receiving treatment.

The Lagos State Police Public Relations Officer, DSP Kenneth Nwosu, when contacted promised to get back to our correspondent on the matter, but he had yet to do so as of press time.

Nothing Must Happen To Tambuwal – NLC Warns