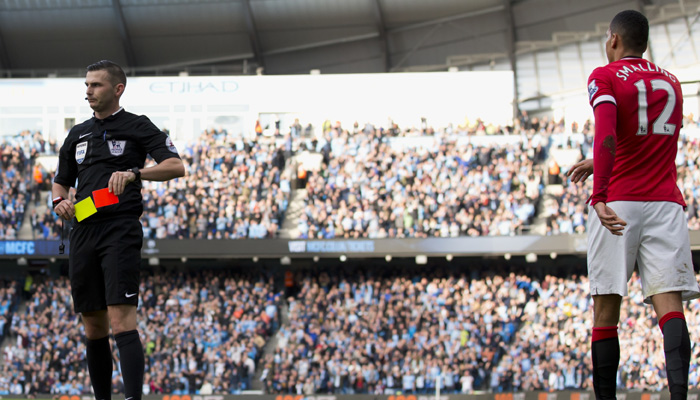 Chris Smalling’s dismissal on Sunday has infuriated his manager, Louis Van Gaal. The defender was sent off in the first half after a second bookable offence against Manchester City when he brought down James Milner with a poor sliding tackle. The 24-year-old had earlier been booked for charging down a Joe Hart goal kick.

Manchester United lost the game by a slim 0-1 defeat after they had to cope with just 10 men for the larger part of the match. Reacting to Smalling’s dismissal, Louis Van Gaal told BBC Sports that defender’s second yellow card was a stupid one.

“The sending off is not one of those things. As a player you have to control your aggression. I didn’t see the first yellow but with the second, you know you already have a yellow, so have to handle it differently. I said that to the players.”

The Dutch manager was however pleased with the performance of his squad who were also impressive against Chelsea the last time.

“We are very close. You saw it against Chelsea and now against Manchester City. They are the two best clubs in this league and the difference is zero I think”, he said.