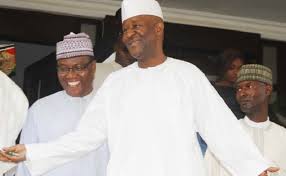 The Peoples Democratic Party (PDP) on Thursday zoned out Governor Bala James Ngilari of Adamawa State from taking part in the 2015 governorship poll.

The National Publicity Secretary, Chief Olisa Metuh said that the party was insisting that Adamawa Central should produce the next governor of the state instead of the Ngilari’s Adamawa North Senatorial zone.

“NWC has decided that the decision and agreements of the candidates in Adamawa during our last exercise last month will be upheld. Accordingly, the gubernatorial election in 2015 has been zoned to Adamawa Central. All aspirants who bought forms (eight of them) that signed the agreement and withdrew are advised to come and exchange it without any payment with the new 2015 forms. It means they are entitled to run since they are from the same senatorial zone The party will fully implement that agreement.”

Ngilari became Governor after a Federal High Court sitting in Abuja ruled that his purported resignation was not valid and ordered that Acting Governor Umaru Fintiri vacates the office immediately.