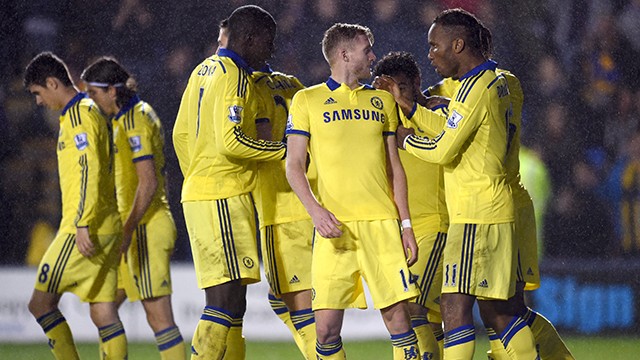 Premier league leaders, Chelsea faced a stern test last night when they squared up away against League two side, Shrewsbury town in a Capital one cup fourth round tie. The Blues endured a difficult start to the game as their hosts put up a disciplined display and looked very dangerous from set-pieces especially corner-kicks.

The first half ended goalless but Chelsea legend, Didier Drogba scored early in the second half with a sublime finish when a Mohammed Salah flick fell his way. Shrewsbury equalized with ten minutes remaining in the game when substitute, Andy Mangan scored from a corner.

With scores leveled, Jose Mourinho made a double substitution as Willian and Matic came on for Salah and Mikel respectively. That change put Chelsea ahead few minutes later as Willian showed some great skills on the left flank before sending in a cross which resulted in an own goal from Shrewsbury’s Jermaine Grandison who was under pressure from Chelsea’s Ivorian striker.

Chelsea Look To Bounce Back As Capital One Cup Resumes