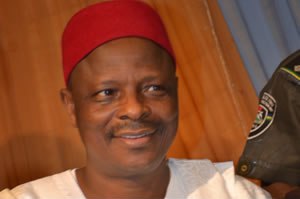 Kano state Governor, Rabiu Kwankwaso On Tuesday declared his interest to contest the 2015 Presidential elections on the platform of the All Progressives Congress (APC). He said the motivation for his interest is to serve and save the nation.

He made his declaration at a rally held in Abuja on Tuesday, the rally had in attendance, leaders of the party and some governors of the states ruled by the APC.

Declaring his interest to run, Governor Kwankwaso said that the crowd at the declaration ground from different part of the nation was a sign that Nigeria would remain united.

“Today, I take this call and formally declare my interest to seek for election as the APC Presidential candidate in the 2015 presidential election.

“It is only the APC that has what it takes to stop the misrule of the Peoples Democratic Party  and also has the power to reverse the decay that is suffocating our country.

“Our party is built with Nigerians in focus. We are the only party that practice internal democracy that believes that free and fair election is the only guideline to sustaining democracy.

“My crave to serve and save our country drove me to join in the race for the House of Representative, representing Kano State years ago,”

“The call to save our country has never been louder, clearer and more unambiguous than now. Governance has been reduced to incompetence and mediocrity.

“To save our country we must walk the journey however difficult,” he said.

I Have No Intention To Be Abia Speaker – Orji’s Son