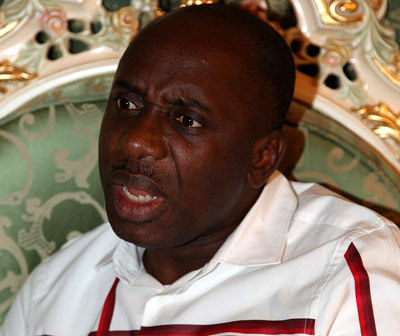 Sometime last week, the Chairman of Peoples Democratic Party (PDP), Dr Adamu Mu’azu visited Rivers State. It was reported that during his meeting with members of his party, he made pronouncements, which appeared to mean his preference for the frontline candidate in the forthcoming PDP gubernatorial primaries and former Junior Minister of Education, Ezebunwo Nyesom Wike.

As soon as that pronouncement filtered into town, wild jubilation erupted among individuals suspected to be gang members around Uruala Street in Mile 2 Diobu. About fifty of them, clutching AK47 riffles were sighted shooting sporadically in the air, shouting and drinking wildly in celebration of what they interpreted to mean the endorsement of their man. Another rival cult allegedly loyal to Soboma Jackreece aka Egberipapa, responded by blocking one of the streets and shooting in the air, ostensibly in preparation for a confrontation.

The whole scenario unsettled many observers and reminded them of what Port Harcourt used to be before Governor Chibuike Amaechi took over in 2007. For those who still recall, the word ‘nightmare’ does not describe it adequately. ‘Horrendous’ will not either. The city was literally taken over by assorted gangsters and different cult groups. The city used to shut down at 6.30pm and the hoodlums took over. Places like Bundu waterside area that stretches to the Borokiri and Sandfill areas were about the hottest no-go-areas. Even Marine Base and Abonnema waterside (before it was demolished by the Amaechi administration) were colonies of cult groups and dens of deadly hard drugs and various narcotics. Women were raped daily. Headless corpses were often sighted littering the roadsides. It was a dangerous and deadly eyesore by daylight.

A greater part of Port Harcourt city was divided into different territories controlled by one cult group or another. Young men were recruited or conscripted into different gangs in the city, and it was something to boast of. Guns were carried around in sacks openly. In Diobu area for instance, if a particular gang controlled Ojike Street, another one would take charge of Nanka Street. That was how it operated, and anyone who challenged any of the gangs was made to pay heavily, often with his or her life.

Armed robbery and kidnapping were very rampant in the city. Lawlessness reigned supreme. Handbags, phones, wristwatches were snatched openly. Movement was restricted. Many residents were sleeping under their beds for fear of stray bullets. To walk around in some streets you had to raise your hands up. Many oil companies relocated their headquarters to Lagos and Abuja. Major hotels in town were running empty from week to week.

Then came Amaechi who made law enforcement a priority and declared a war on these criminals. The Rivers State Government reportedly spent huge sums of money to specially train select members of the Nigerian Police in Israel and purchase special equipment for them. This led to the establishment of a special unit known as ‘C4i’ in collaboration with the Nigerian Police Force.

The Rivers State Government was said to have entered an agreement with the Nigerian Police Force to allow the police officers who were trained in Israel to spend at least eight years in the state to impact their knowledge on their colleagues before being transferred to another location. The operational efficiency of the Police in breaking many notorious kidnapping operations was enhanced by C4i and extended beyond Rivers State to neighbouring states like Abia and Imo. In 2010 for instance, a notorious kidnap kingpin in Abia State, Obioma Nwakwo, notoriously known as Osisikankwu, who continuously terrorized the state for many years, was traced all the way, captured and killed with the support of the men from Rivers State Police Command.

During the period under review, calm returned back to Port Harcourt. The criminal gangs were either killed or driven underground. Nightlife returned fully, the hospitality industry started booming again. Many of the companies that relocated out of the city due to insecurity started returning back.

This atmosphere lasted until when the controversial Commissioner, now AIG Joseph Mbu was posted to the city. He systematically dismantled all the security infrastructure that was put in place before his arrival. Against the agreement reached with the Rivers State Government, the former Commissioner posted all the Israeli-trained Police Officers to locations outside the state on the allegation that they were loyal to Governor Amaechi. The whole security set-up became disorganised as these new sets of people neither had the specialised training nor did they understand the complex terrain issues in Rivers State.

As a result, the police found it very difficult to track and apprehend kidnappers and criminals who were predominantly in the creeks. Furthermore, Mr. Mbu employed a partisan style that focused more on political issues rather than the issues of professional policing. He was busy disrupting rallies and providing security cover for friendly Very Important Persons (VIPs) rather than fighting crime in the city. He continued to romance with the militants just to demonstrate how loyal he was to the First Lady and the Peoples Democratic Party. Under Mbu many militants who were arrested in the city for illegal possession of weapons were released on orders from above.

Mbu’s actions emboldened the militants. They started returning to the city in droves. Sometime in May 2013, these militants regrouped as Rivers Peoples Assembly under the leadership of Chief Ateke Tom, and organised a solidarity march in support of the Jonathan administration. They also reportedly marched to Rivers State Government House to protest against the Governor, fully escorted by the men of the Nigerian Police under Mbu.

Rivers people are yet to realize the full impact of the destruction Mr. Mbu wrecked in the state in the name of obeying the ‘orders from above’. Today, all the Degbam, Dewell, Elegamface, Icelanders, Greenlanders, Bush Boys, Outlaws etc are said to be fully back in town. Kidnapping is now a daily affair. As I write, a former President of the Nigerian Bar Association is still in captivity. The frequency of armed robbery has quadrupled. Militant leaders are fully integrated into PDP in Rivers State as stakeholders. One of the known militant leaders, Chief Tom Ateke, is even seeking to contest the gubernatorial elections in the state on the platform of PDP.

As the elections approach, it is widely believed that some of these gangsters are being prepped to play a role in thwarting the popular will of the people. The residents of Port Harcourt have increasingly become jittery and terrified. No one wants to contemplate the rape, the assault, the anguish, the horror of the past – not in the name of election. Should the people sit akimbo and helplessly surrender the oil capital of Nigeria into the hands of miscreants again?  Who wants to take Port Harcourt back to yesteryears?

Bayo Oluwasanmi: My Next President of Nigeria

@DeleMomodu: Our President And The Leap Of Faith