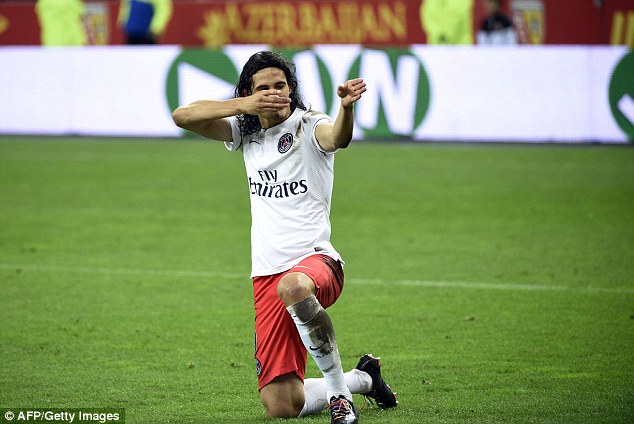 Last night (Friday), Paris Saint Germain defeated under-performing RC Lens 3-1 in a Ligue 1 game at the Stade de France but the match was not without controversies. Three players were sent off during the game; two for Lens and one for PSG. It is that of PSG which was really controversial.

Lens went ahead in the 10th minute through a goal from Adamo Coulibaly in the 10th minute. Yohan Cabaye got the scores leveled for PSG in the 28th minute when he latched onto a pass from Maxwell from 30 metres out. Just six minutes later, it was the turn of Maxwell to score a nice lob and Lens were now trailing. In the 54th minute, Lens’ were further hit with a red card which was shown Jean-Philippe Gbamin for a second bookable offence after pushing Edinson Cavani in the penalty area.

The Uruguayan scored from the resulting penalty but his celebration also earned him a red card eventually. He had knelt down and was shooting an imaginary gun. The referee showed him a yellow card for that celebration and while he protested the decision, he touched the referee and the referee, Nicolas Rainville sent him off as he quickly pulled out his red card.

Already, the PSG president Nasser Al-Khelaifi has criticised the referee’s decision. According to him such punishment is bad for French football

PSG president Nasser Al-Khelaifi has criticised the controversial decision, insisting that punishments given for such celebrations are bad for French football. Speaking to Canal +, he had this to say:

‘It is the media’s job to speak about the referee,’ he said to Canal +.

‘Cavani does not deserve that red card. And why has he got a yellow before? He always does the same celebration.

‘This is not normal and it is not good for French football if we want to develop. It is a bad situation for everyone.’

The red card rain was not over as Len’s Jerome Le Moigne also saw red after two bookable offences in the 59th minute.