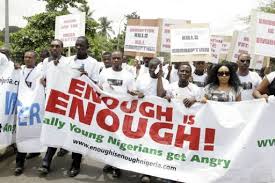 As 2015 general election draw close, we have seen an influx of different campaign groups all over the country, top on the list is Transformation Ambassadors of Nigeria, an ally of the ruling party, People’s Democratic Party (PDP) with one mission, re elect Good Luck Jonathan as president of Nigeria come 2015.

We have seen other political parties and their allies display their jingles on television and radio stations and organize all sort of rallies all over the country appealing to Nigerians to vote their parties in the forth coming general election.

When I watch the way youths attend and participate in political rallies in Nigeria, I am bewildered at the level of our ignorance.

Why will Nigerian youths be so engrossed to this political rallies as if there lives are dependant on it? When are we going to learn our lessons as Youths in this country?

I was still a student of History & International Relations at Imo State University Owerri in 2011 when Jonathan was campaigning to be elected as president of Nigeria, what moved me among his campaign promises was his agenda for the youths, eradication of all forms of youth restiveness through Youth empowerment Schemes, creation of millions of job for the millions of unemployed youths.

His campaign promises were youth oriented, I can’t forget his growing up no school sandals and going to school with empty stomach speeches. He promised breadth of fresh Air to Nigerians if elected, I was convinced considering the circumstances surrendering president Jonathan’s emergence at that time, he will deliver his campaign promises if elected for a full term of four years in office as president of Nigeria in 2011.

Nigerian youths came out en masse and voted for him, he won with a clear margin and on 29th May 2011 he was sworn in as Nigeria’s 4th democratically elected president of Nigeria, the Nigerian youths waited for the breadth of fresh air and a transformed Nigeria, let me not say another unfulfilled campaign promises, rather I will leave the question of president Jonathan’s performance on the lips of every Nigerian youth that voted for him in 2011.

Three years down the line, I have graduated, I have done my one year mandatory National Youth Service Corp. (NYSC) yet no job, I am just one out of millions of Youths who are graduates without jobs.

Politicians use it as an advantage during election, they organize all categories of political rallies, with the help of their political thugs, they mobilise thousands of youths all over the 36 States and the FCT, with as little as #5000 per youth, (mostly graduates)

All these campaign rallies and “must rule charlatan syndrome” didn’t start today, we saw it in Abacha’s time, Obasanjo’s time in his botched third term plot, even when late president Yar Adua was dying in far away Saudi Arabia, his aides told us he can rule from any where in the World and right now we are seeing same version.

I always ask myself what is the motivation behind the number of youths that storm venues of political rallies? Good governance or money factor? Whatever the reason, my own concern are the youths.

From my research, I discovered that 80% of those youths in such rallies are unemployed, that is why they can be able to go to such rallies as early as 6 AM in support of desperate politicians that cares only about how to rule.

I keep asking myself what happened to our conscience? Why will I support a politician that can’t give me a job or guarantee my security in my own country? Why will I identify with politicians that glorifies corruption and celebrates with the convicted? Do I have a future with such politician(s) as my president?

One of my die hard friend of PDP during an argument told me if PDP decides to adopt a moron as their presidential candidate in the forth coming election, he ill gladly vote the person as long as its PDP, I asked him why? He said PDP knows how to share money unlike other political parties, to this my friend good governance don’t bother him, just “share the money”.

Like my friend, most Nigerian youths are ignorant, when ever you speak against the government they tag you an opposition, they allow sentiments rule their conscience. Nigerian youths also see our politicians as Messiah that must be worshipped, they bow to these politicians and can kill to see that this desperate politicians succeeds. Politics is a very dirty game in Nigeria, only the dirty play and win it.

Politicians knows the youths are vulnerable and continue to take advantage of that to impose themselves on us. That’s why they can’t create policies or institutions that will provide sustainable jobs for the teaming unemployed youths, they rather reserve such jobs for their children while the rest of us can go and roost.

September 25th 2014 was declared public holiday in Enugu State to declare their support for president Jonathan’s re election in 2015, 70% of the crowd that came were youths, many of my friends were in attendance, standing under the hot sun, some came all the way from neighbouring States as early as 5AM, I saw more than 20 Transport Luxurious buses that conveyed people from different villages to Nnamdi Azikiwe Stadium Enugu, venue of the rally, after the rally money was shared as usual.

Until the Nigerian youths start changing their mindset the way they see these politicians, the better for our Nation. The earlier we realize we can make a change in this country, the better for us, we make up the largest population in this Country and that’s the greatest advantage, stomach infrastructure like bag of rice, bag of garri #5000 to #20,000 will not last forever. Good government can create policies and structures that will last for generations, think twice & vote wisely, the power to decide who leads us come 2015 is in our hands and February 2015 is the time.

Tunde Leye: How We Carry Our Calabash