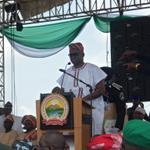 Governor Ayodele Fayose has been sworn in as an executive governor of Ekiti State following victory at the polls against the then incumbent Kayode Fayemi of the All Progressives Congress, APC,.

Fayose of the People’s democratic party during his speech on thursday promised to empower the people of Ekiti to pursue and realize their aspiration, encouraged to develop at the inaugural ceremony at Oluyemi Kayode Stadium, in the state capital.

Fayose  declared that Ekiti State has returned to the mainstream of Nigerian politics stressing that he would ensure strategic partnership with the Federal Government and its agencies.

“We shall make our contributions in human and natural resources to the Nigerian commonwealth and also ensure that we secure our dues. We shall collaborate with foreign missions and development partners in our developmental strides.”

The new governor will promise that he would study the objectives of the existing regional political and economic groups in the South West and make his inputs and decisions as appropriate.

Fayose said he would be guided by the provision of section 3 and part 1, first Schedule of the 1999 constitution on the list of local governments in Nigeria, in the allocation of resources to the local council. The LCDAs do not feature on this list, meaning they are going to be starved of funds and die naturally.

Governor Fayose promised that his government would encourage increase agricultural production towards ensuring food security for local consumption and export.

Fayose further promise that he would strengthen education, health security, public service, and pay attention to the infrastructural development of the state.

” Good people of Ekiti State, the last minute attempt by the opposition party to truncate the mandate which you freely entrusted to me on June 21 has clearly confirmed the true character and direction of interest of these political desperadoes.

“Their machination is to demonise and portray me as a violent person. The role and indeed the open conduct of some of the judicial officers in the plot, are already being investigated by the appropriate authorities. As we await the outcome, my government will join hands with the appropriate authorities in ensuring that no stone is left unturned in the retracking of our hallowed democratic institutions from slide and bastardisation. The judiciary should be truly repositioned as the actual temple of justice and last hope bastion of hope for all.”

Governor Fayose who promised to patronize local contractors in Ekiti and not import contractors from Lagos or Abuja. On debt owed by the state, Fayose said the following.

” I report to you that our state had been plunged into heavy debt dungeon of over forty nine billion Naira by own own brothers and sisters as follows: bond (capital market) and agriculture loan, N21..2b, other bank loans, N15.5b, outstanding, salary (two month), N2.4b, unpaid subventions to parastatals and tertiary institutions, N70m, 2014 leave bonus, N400m, unpaid pensions and gratuities, N3.2b, unremitted withholding taxes and other deductions, N850m and indebtedness to contractors, N10b totaling N57.45B.”

“Today our state has been committed financially up and until year 2020, even beyond my own administration. The proportionate benefits of this huge debt to our people remain to be seen or felt by the ordinary man and woman in our state,”he added.

The Members who were called to the podium during the swearing in ceremony, committed to the ruling party in the state.