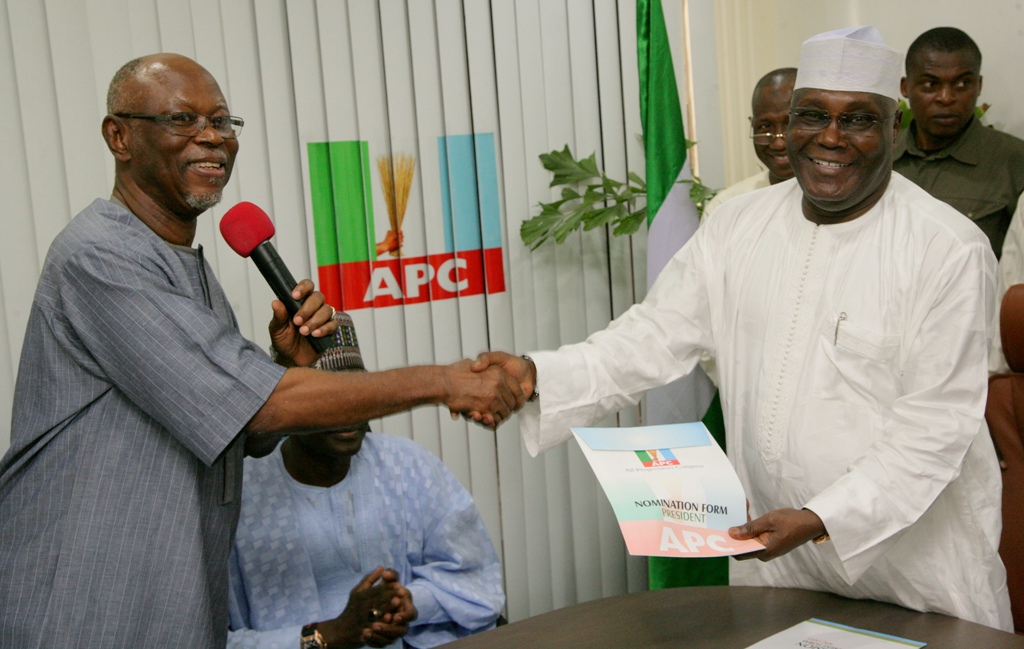 Atiku is the first candidate to pick the nomination form on the party’s platform. Atiku, speaking to journalists after picking the form charged the party leaders to ensure a level play ground for all presidential aspirants before and during the party primaries.

In his remarks he said: “Mr Chairman, I need not let you know my political antecedents as far as the provision of a level playing field for every member of this party because that is the only thing or one of the things that will make us different from the ruling party.

“Anyone who believes he has the democratic right should be given that opportunity to exercise that right. It is left to the members of this party and the Nigerian public to make a decision.

“Mr Chairman, it is my therefore my singular honor and privilege to hand over to you or your representative two receipts: one, presidential expression of interest and the second one, presidential nomination form all totaling N27.5million”.

Former Vice President also said that the private sector is a better facilitator of job creation, than government. Atiku, while unveiling his policy agenda yesterday in Abuja and made available to NewsWireNGR, said he would use the instrumentality of tax rebates to encourage the private sector to create more jobs.

“A lot of time people have asked me if my strategy of using tax rebate as a tool for private sector job creation will not reduce the income coming from government.

“My answer is that those people who will be employed in the jobs that are created will be taxable as well and thus government is even going to make more money. The way to run a modern government is to run it as a business. If you do not know how to run businesses, you certainly don’t have any business running government,” Atiku said.

According to him, “the draft policy was drawn up within the context of the manifesto of the APC and the document provides an overview of our policy position – the main thrust of which is the explicit bid to modify the way the machinery of the Federal Government works.”

The draft policy contains key policy areas which include employment generation and wealth creation; infrastructure and power; education and skill acquisition; security; citizenship and governance; agriculture and food security and Niger-Delta and North-East re-integration.
Each of the key policy areas has sub-components that make allowance for broad inclusiveness which will make the policies have direct impact on ordinary Nigerians.

In the area of security, the draft policy promises to: “aggressively combat the scourge of terrorism and insurgency by increased resources and better co-ordination between the security agencies; replace the security adviser with a National Security Council; improved civil-military relations; pave way for the establishment of state police and clarify local government and state boundaries to pre-empt and defuse inter-communal conflicts.”

According to him, “the days have gone when government will announce 7 or 9 points agenda. What we are bringing on board are proposals that are unprecedented in the way government business of governance is conducted in this country.”

Earlier in his address, the Director General of the Atiku Campaign Organisation, Professor Babalola Borishade noted that the draft policy will be exhaustively reviewed by a review panel comprising policy experts later in the month at the Obasanjo Presidential Library in Otta, Ogun State.