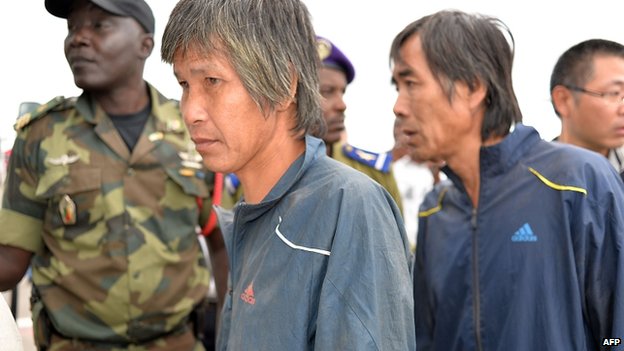 Cameroon President, Paul Biya announced the release of some 10 hostages and 17 others  release in a statement on state radio: “The 27 hostages kidnapped on May 16, 2014, at Waza and on July 27, 2014, at Kolofata were given this night to Cameroonian authorities.

The authorities gave no explanation of how they managed to get the Insurgents to agree to the release of the hostages after about five months in captivity.

it has now been revealed that while President Goodluck Jonathan was in a meeting with  the west African countries most hit by the activities of Boko Haram including Chad, Benin Republic, Niger and Cameroon in Niamey on 7th October,  representatives  of the  government were negotiating the release of 27 hostages.The final agreement for their release was reached late night, Friday, October 10th, and hostages were flown to Yaounde early Saturday morning. Among the 27 hostages was Akaoua Babiana, the wife of Cameroon’s vice prime minister and 10 Chinese workers. The hostages were  abducted on May 16, 2014, at Waza and on July 27, 2014, at Kolofata, both in Cameroon’s Far North Region.

According to  SaharaReporters, the terms of the  agreement included the payment of an undisclosed sum of money from the Chinese government and the Cameroonian government had to agree to release four commanders of the Islamist group who had been in Cameroonian jails. The most disturbing part of the deal is that Boko Haram militants demanded and received a significant supply of arms and ammunition, including a guarantee by Cameroon that the weapons would have safe passage to insurgent fighters.

The Government also had to pay $400,000 to secure the release of the vice prime minister’s wife.

The meeting of their demands by governmment further makes the effort to get the release of the abducted chibok girls more difficult. Ransom payment and fortification of their armoury only strengthens the sect in the raging war with the Nigerian Army.