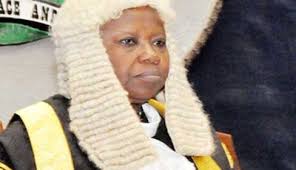 In preparation for the choice of the successor to the Chief Justice of Nigeria, Justice Aloma Mukthar, the Federal Judicial Service commission met for six hours  yesterday. Justice Mukthar’s tenure expires in November.

The meeting held to consider possible replacements to Justice Aloma. The commission, it was learnt, met early to begin the process of appointing a successor to the CJN, since she had made it clear to all that she did not want any extension of tenure. The names of three most senior Justices of the Supreme Court has been tabled.

According to reports gathered by the Vanguard, the three Justices are  Mahmud Mohammed, Walter Onnoghen and Tanko Ibrahim.

However, only one of them will succeed Justice Aloma Mukhtar in November.