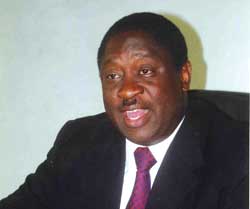 The other orders vacated by the court include those also appointing Dr. Agbakoba as receiver/manager over assets of Chartered Investment Limited, Resort International Limited, Roygate Properties Limited;

Agbakoba and Babalakin, almost exchanged blows but for the prompt intervention of other lawyers, including Chief Wale Akoni, SAN and Mr Abiodun Layonu, SAN.

Troubled started after Justice Buba upturned the orders of September 22, made by Justice Abang empowering AMCON to take over assets of Babalakin’s companies, including MM 2.

In the order, Agbakoba was also appointed as the receiver/manager over all the companies of Babalakin including Bi-Courtney Limited, Chartered Investment Limited, Resort International Limited and Roygate Properties Limited.

But the Chief Judge of the Federal High Court, Justice Ibrahim Auta had re-assigned the case to Justice Buba, who was handling previous case between the parties.

When the case came up, lawyers to Babalakin and his companies had urged the court to suspend the interim orders made by Justice Abang empowering Agbakoba to act as the receiver/manager for the companies.

Akoni argued that the integrity of the court had been badly affected with the conflicting order, adding that there was need for the court to act fast to stop the development.

Justice Buba then ruled in favour of Babalakin decrying the act of AMCON as indication of their belief that the court can only bark and not bite.

Babalakin, who was seated in his black Toyota Jeep within the court premises throughout the proceeding, had come out at the same time when Agbakoba was coming out of the court.

Agbakoba then looked at Babalakin and said: “Wale, give me my money. I will collect my money from you, and that’s final.”
Responding, Babalakin replied by threatening to come after Agbakoba.

Pointing at Agbakoba, Babalakin said: “Why do you want to ruin me? You want to kill my businesses, I will never allow you.”
Agbakoba also angrily replied him, saying “you this small lawyer, when did you start practicing self? I’m 40 years at the bar, and so you are too small to me.”

As the two lawyers were exchanging words, Akoni and Layonu intervened and brought the situation under control.