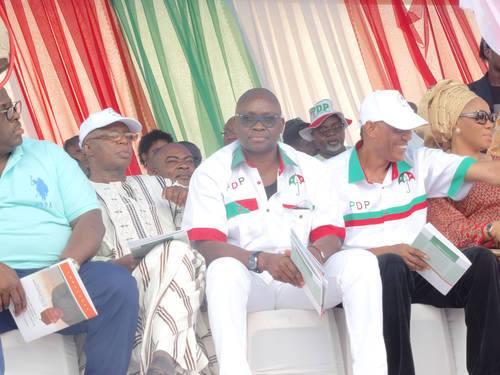 The Peoples Democratic Party (PDP) has alerted the nation of a very dangerous and anti-people design by the APC to influence the judiciary, subvert the will of the people and stop the inauguration of the duly elected government in Ekiti state. The party has therefore called for a full investigation into the activities of some officers of Ekiti state judiciary involved in the recent crisis in the state.

PDP National Publicity Secretary, Olisa Metuh in a statement on Tuesday described the underground plot by the APC to stop the inauguration of the clear winner of the June 21 Ekiti governorship election, Mr. Ayo Fayose as “a slap in the face of the people of Ekiti state, an assault on democracy and an attempt to rape the judiciary”, adding that no amount of machination by the APC will stop Fayose’s swearing-in on October 16, 2014 in accordance with the desire of the people of Ekiti as expressed at the polls.

“In the past two weeks, we have witnessed series of lies, propaganda, threats and blackmail by the APC in their desperate bid to truncate the wish of the people. This desperate party has gone notches up in this awkward quest for power by inciting violence and outlandishly calling for the arrest of the state governor-elect.

“After losing roundly in an election widely acclaimed as one of the most credible in our recent history as a nation, the APC in its desperation for power has shamelessly designed a heinous plot to compromise certain judicial officers in order to stop the inauguration of Mr. Ayo Fayose as the democratically elected governor of Ekiti state.

“We have here in our hands, an attempt to re-enact the design where the same APC leaders under the defunct ACN sabotaged and truncated the popular mandate given to the PDP in the 2011 governorship election by the people of Osun and Ekiti States through the verdicts of certain judicial officers.

“It is no longer in doubt that the vanquished APC seeks to perpetuate itself in power in Ekiti. We hereby confirm that the current toxic plot by APC is to manipulate the judiciary, secure a pronouncement to stop the October 16, 2014 inauguration and pave the way for the swearing-in of the Speaker of the Ekiti state House of Assembly, who as Acting Governor, will superintend over the conduct of a fresh election where the APC will have the floor for unhindered manipulation.”

“We wish to sensitize Nigerians that it was in furtherance of this plot that the defeated Governor Kayode Fayemi ordered the Chief Judge of Ekiti state, Justice Ayo Daramola to transfer all pending cases relating to the governorship election, including those before the election petition tribunal outside state for trial.

“The directive is to ensure that the APC enjoys a field day, away from the people of Ekiti state in order to manipulate the process and actualize the boast by Governor Fayemi that his party will recover the state.

“This clear interference in the working of another arm of government portrays the APC leaders as desperate and with no regard for the tenets of democracy, the principle of separation of powers and the sacred will of their people.

“We are indeed taken aback that the same Governor Fayemi who was among the first Nigerians to congratulate the governor-elect, an action that earned him very wide commendation would now allow himself to be a tool in the hands of politicians who are desperate to truncate democracy and destroy the unity of his state.

“We have also noted the threat, blackmail and deployment of thugs by the APC to harass and unleash violence on the citizens of Ekiti state for supporting the governor-elect as well as sponsoring the publication of fabrications in a section of the media to tarnish his image.

“One of such is the widely publicized allegation that the governor-elect assaulted a judge only for Nigerians to discover that it was totally false.

“However, we wish to warn the APC that the people of Ekiti state have expressed their preference for the PDP by electing Ayo Fayose, therefore, no amount of blackmail, threat and propaganda will take away this sacred mandate.

“For the avoidance of doubts, our great party wishes to state categorically that it is determined to use all legal measures to defend the mandate overwhelmingly given to Mr. Ayo Fayose and no “jankara” court order can truncate the process of his swearing-in on October 16, 2014 in accordance with the will and desire of the people of Ekiti State.

“The PDP therefore calls for full investigation into the activities of some officers of Ekiti state judiciary involved in the recent crisis in the state. In the interim, we stand by the people of Ekiti as they continue in their preparations for the swearing-in ceremony of Mr. Ayo Fayose as the duly elected governor which will mark the end of the misrule by the APC in Ekiti”, the PDP said.