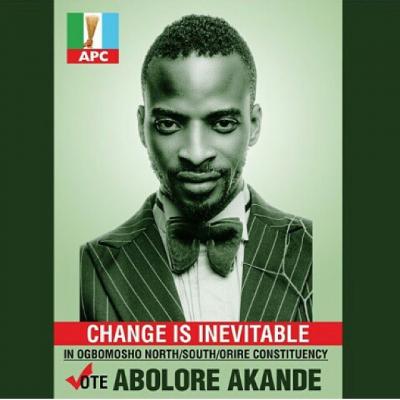 Politics, as practised in Nigeria, is often times annoyingly drab and lacklustre. At other instances, it is painfully cold-hearted and cold-blooded! While the actors are simply having the ball of their lives, those on the other side are, to say the least, browned-off and put out by what they glean from the political stage. It is in these regards that the coming on board of harbingers of entertainment will do the system a world of good.

The spectators are so harassed and enervated by what they see on the political setting that they wouldn’t mind having a ‘non-performer’ feature among the characters. That is if only he or she can bring to table the much needed drama and perform in that wise (One wonders why our politicians who are known to take advantage of almost anything on earth are yet to exploit this).

Whenever this is at issue, one person who readily comes to mind is that particular thespian from Edo State who is very grandiloquent and bombastic in his use of the English language. So good is he in his manner of speaking that his fan base went beyond the spectators into including his then colleagues at the political theatre. Notwithstanding this, majority of those in his constituency refused returning him when he sought a second term. Their grouse was that he wasn’t living up to what they expected of him when they gave him the mandate.

But then, a greater section of Nigerians have refused to forgive his native Edo State people for denying them such a character who always brought comic relief to the drab and mostly adrenalized Nigerian politics. They wondered why his people would describe him as one who is not delivering the goods when he is already performing to the delight of the wider section of Nigerians. Someone even said the man earnestly goofed; “he should have offered himself as a presidential aspirant and seen what a massive vote he would have raked in.” Even if the ballots will essentially come from the naïve, it would not have made any difference, I must add.

Please don’t mind me, I was actually headed somewhere with that. Now, if I ask you to mention the entertainers we have in this country at the moment, I can wager my last quid that you would be found wanting. Don’t think it is as a result of your ignorance. No, that’s not it. It is rather because many of them you had known as showbiz actors have now thrown away their costumes or microphones and have adorned a political garb. Gone are the days when we see them in posters promoting their movies and shows, we are now seeing them in posters which promote them for a particular public office. Indeed, there are two sides to every poster just as there are for every coin!

Some Nigerians have criticized the ambitions of these entertainers saying they are only going into politics to help themselves with the common till. But then I ask; who among our politicians have not been lured into seeking political office to feather his or her economic nest? Why must the case of our showbiz guys be any different? I like the defence put up for his comrades by the former president of Actors Guild of Nigeria, AGN, Segun Arinze. He had dismissed such supposition as untrue, saying, “I don’t think they are going into politics for the money. I’m not going to be one of the people who would come out and say they are going into politics for the money. But they are going there to positively affect society.”

However, his line of argument differed from that of another showbiz colossus, Charles Oputa alias Charley Boy who submitted that most of the celebrities were venturing into politics because they are afraid of their future and only looking for a way to secure it. If that is the case, why then would the former AGN president suggest that entertainers are a group of hard working bunch whose hard work had made them so successful that their getting into politics cannot be about helping their financial condition.

And this is where I would have an issue with the submission of ‘Black Arrow’ if that is actually his line of thought. Is he insinuating that somebody like Tony Tetuila who, in one of his dated hits, accused former Lagos governor, Bola Tinubu of bashing his car, is still financially buoyant? TheCable caught my fascination when it adopted this headline for the story about the musician joining politics: ‘Forgotten Tony Tetuila resurfaces for politics.’ That very much says it all!

Anyways, I think the artiste will put up a good showing at the polls since he humbly cut his coat according to his clothe by running for a seat in his Kwara State House of Assembly. I appreciate him for not being as ambitious as one of his colleagues who ridiculously want to govern Rivers State. But nothing is impossible; call that the audacity of aspiration and you would be spot on. However, Tony Tetuila had better done something about the painted hair he is wearing on his head. With that hairdo, he would just be making a studio or a stage out of the hallowed chamber of Kwara State House of Assembly, that is if he is lucky enough to get elected.

Many are these artistes who are currently undertaking a very high jump from entertainment to politics. This throws up a particular worry. Since they are getting into politics by means of defection (that is ditching entertainment for politics), how sure are we that they won’t become serial defectors once they get absorbed into Nigerian politics. Are we sure they won’t become professors in what has come to be known as ‘Institute of Jumpology’ in RayPower’s Political Platform; teaching the politicians they would meet better ways of cross-carpeting from one party to one another? Please let this their defection from the entertainment party to a particular political party be a cul-de-sac as Nigerians have suffered enough heartbreak from political prostitutes who can’t seem to settle in a place.

Suffix to list some of the artistes who have so far indicated interest to participate in the 2015 general elections. The last time I checked we have Kenneth Okonkwo (of the Living In Bondage fame) Julius Agwu, Bob-Manuel Udogwu, Funke Adesiyan, Dan D’Humourous, Desmond Elliot, Kenny Saint Best (formerly known as Kenny Saint Brown), Tony Tetuila, Jibola Dabo, Kate Henshaw, Alexander Abolore Ajifolaj Ifaola Akande, better known as 9ice and the many others who would soon manifest what Charley Boy referred to as ‘group-souls’ syndrome. Aside Julius Agwu who is seeking to govern Rivers State, all the others listed wants to be in the legislative arm of government. It is hoped they would be able to exhibit the gravitas required of the legislative business.

Let’s not rule out the fact that the popular attraction the lawmaking organ of government got may be informed by the fact that fighting and pandemonium has come to be a regular feature on the floors of some state houses of assembly including those of the National Assembly. These entertainers may have concluded that the craziness and freakiness of showbiz is all that is needed to give their people a good representation at the legislature. They had better disabused their mind of such thoughts and made sure they are going there to make a positive impact as claimed by Segun Arinze.

One thing we dare not do is to ask these showbiz folks not to run for the public offices of their choosing as our ground norm – the 1999 Constitution as amended, forbids us from ever trying that. We should equally be guided by the postulation of the US diplomat and economist – Chester Bowles who said, “Government is too big and important to be left to politicians,” whenever we may want to deny these entertainers the right to be in government.

Who knows, they may become the much awaited avant-garde politicians who would change the face of politics and politicking in our country. It is highly probable they will turn out the ones to snatch power from the old foxes parading the landscape who have refused to quit the stage even when the law of diminishing returns is taking its toll on them. We must however warn these entertainers supposedly embracing politics not to take us for a ride.

Let it not be that they are just flying the kite just to inch up their popularity. Should that be the case, then would they have shown that nothing is too important to be toyed with in our country. They would then be setting a bad precedence that would discourage well-meaning and self-respecting Nigerians from ever getting into politics. Be that as it may, there is no gain denying the showbiz chaps the opportunity of playing politics. Verily, our political space needs fresh bloods like them!