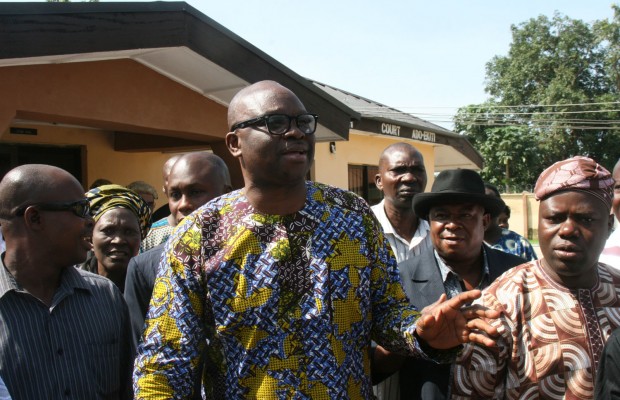 Mr Ayodele Fayose as described as baseless, spurious and a product of an ignorant mind the call by the All Progressives Party through the National Publicity secretary Lai Mohammed for his arrest following the recent political violence in the state.

He spoke through his  Chief Press Secretary, Mr Idowu Adelusi, Fayose said Mohammed was fed with lies about the happenings in Ekiti State and that he had exposed himself by commenting in a manner only an ignorant fellow would do.

“We Yoruba people have a saying that ‘inu a bimo ku ki idun’ (somebody who gave birth and lost the child would not be happy). Having snatched people’s mandate through the back door, not once but twice, to rule states where they did not win elections, the APC and its leaders thought it the best way to secure electoral victory.

“They did those things in the past through some spurious judgments and were hoping for a repeat performance in Ekiti State after the people rejected them with His Excellency, Mr Ayo Fayose, trouncing their candidate 16 goals to zero. Their man could not even win his local government.

“Their evil plan to use compromised judicial officers last Monday to steal the people’s mandate was scuttled by the vigilant voters who freely gave their mandate to Fayose. Their game plan was to do another abracadabra and get the inauguration of the governor-elect aborted.

“They were planning to get the Speaker of the House of Assembly inaugurated as acting governor. People from Gboyin Local Government Area where Speaker Adewale Omirin hails from were already jubilating.

“God, in His mercy, exposed them. For Lai Mohammed to put the blame on Fayose smacks of bad belle and malice,” he said.