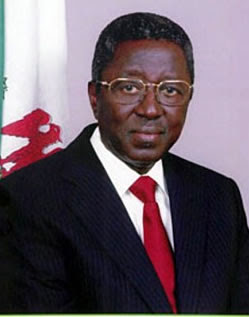 Plateau State is the twelfth largest state of Nigeria, and is roughly located in the center of the country. It is geographically unique in Nigeria because its boundaries totally surround the Jos Plateau, having the Jos Plateau totally in its central and northern part. Its capital is Jos.

Plateau State is celebrated as “The Home of Peace and Tourism”, an image that has been fractured in recent years by Muslim-Christian clashes in the state. Plateau State gets its name from the Jos Plateau. It has a population of around 3.5 million people.

People from other parts of country have come to settle in Plateau State; these include the Urhobos, Hausa, Fulani/Kanuri in Wase, Igbo, Yoruba, Ibibio, Annang, Efik, Ijaw, and Bini. Indeed it is a miniature Nigeria and permit me to add on several occasions has played the role of the heartbeat of Nigerian politics, whether it is Abiola’s June 12 or Obj’s 1999 PDP adventure, or before then, the Diya Coup…or the fact that PDP’s first Chairman was a Plateau son.

Just so you know, even General Muhammadu Buhari was GOC in the Maxwell Khobe Barracks located in the state.

Before I bore you, or make you lose attention, this is not about the history of Plateau state, but for sure, my few lines here, portends a lot for the future of this blessed state.

Fast-Forward 2015: the tenure of a certain airman and general, pastor and father of the state, Jonah David Jang comes to end. And next year’s governorship battle has begun with interactions, investigation and interventions in many folds taking place. Groups have berthed to promote interests of individuals, and off course even more importantly though sadly too “zonal interest.

While in many other climes in the Nigerian polity, religion and party affiliation would play a role, the two former will play very little roles given the dynamics in Plateau state. Plateau has three geo-political zones – Plateau South, Plateau Central and Plateau North, and the battle is amongst them. Since time immemorial, , the zoning ‘higi haga’ permutation fills the number one seat. That principle has been religiously followed for 14 years.

However, politicians today are divided on that age-long arrangement. Some agree that, based on zoning; the three zones have enjoyed the slot. Another argument is that while it may have gone round, has it gone through the major ethnic groups. Other stakeholders want the process to start all over again. Others insist it should start anti-clockwise. Some even want the zoning to be discontinued so that the contest could be thrown open.

I read in debates that okay “Politicians from Plateau North, which produced Jang are claiming that all the three zones have produced one governor each beginning from 1979. They are said that the South produced the first two civilian governors: Chief Solomon Lar (1979-1983) and Sir Fidelis Tapgun (1992-1994). Then, in 1999, power shifted to Plateau Central, and Chief Joshua Dariye served a two term of eight years, which terminated in 2007. The last zone in that arrangement is Plateau North, which produced Jang who would be completing his second term of eight years in 2015.”

Now hold your breath my dear reader, why everyone seems to lay claim to the exalted seat. The truth is that Plateau must move ahead, and if we agree that the state must move ahead. We need a person who understands the Plateau story. It is not about a zone versus the other or starting clockwise or anti-clockwise:  One of the many reasons Plateau sons; daughters and elders should understand when Jonah Jang says, “We should pray…rather than zone”.

Among the current crop, how many of them understand the synergy that should exist intellectually, politically and otherwise in taking Plateau to the next step. There is a heritage to protect, one that has in recent times come under intense attack; we don’t need the geometry of zoning which is a case of neither here or there. Let me ask if Tallen had won in 2011, how would the zonal politics be now, or how does zonal interplay portray fairness and equity when the likes of Haruna Dabin, from the Central zone is playing his 2015 script.

Okay let me ask, is there a gentleman’s word between Baba Jang and Baba Longjang that says “We will leave together to make way for not only a younger person, but to allow for the Plateau story to be better told by a new crop.”

“How do we as a people translate the agitation by the South that the zone is yet to produce a governor in this dispensation? Their argument is that Lar and Tapgun were governors in an earlier dispensation in the old Plateau State before Nasarawa State was carved out from it. They argue that since Nasarawa State was carved out of the state, Plateau South has not produced a governor. They maintained that the zone should be given a chance to produce the next governor.

However, the people of Plateau Central are also laying claim to the governorship. They pointed out that the major ethnic groups in the three zones have governed the state. The ethnic groups are the Tarok and the Goemai (Southern Zone), the Berom (Northern Zone). They said the only major ethnic group that is yet to enjoy the slot is the Angas of the Central Zone. “

They insist that although Dariye, who governed the state between 1999 and 2007, is from the Central Zone, he hails from a minority ethnic group. So, since the major tribes have taken their turns, they argue that the new zoning arrangement should start from their zone to give room for the Angas tribe to produce the next governor in 2015.

While Governor Jang is conscious of these agitations, do we reduce Plateau state to a chop I chop arrangement or better still continue a turn-by-turn party at the expense of the best?

Let me ask sarcastically is there anything like hospital for minorities or roads for majority, are we after zonal rule or good governance? We are where we are today because of the vision and mission statement that was translated by a team that understood in oscillatory terms the direction needed to be followed, do we not deserve a personality that understand that more distance can and should be covered. Or do we covertly and overtly enmesh ourselves in ethnic jingoism and ‘parapoism’ of it’s our turn and miss the best that we can present and benefit from as a people.

I am not a paid writer, I am a non-indigenous resident citizen of this state, and I do love this state, it is the only state I have known.