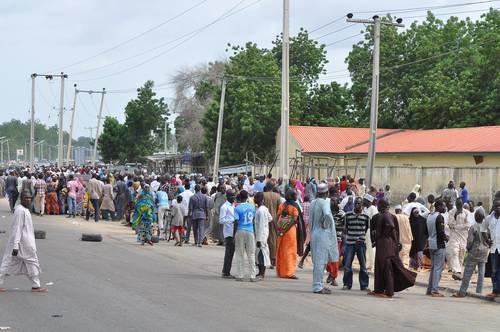 No fewer than 26,391 internally displaced persons have been registered by the National Emergency Management Agency on Wednesday, as a result of Boko Haram militants attacks on Bama.

According to the Northeast Information Officer of the agency, Mallam AbdulKadir Ibrahim, the influx into Maiduguri from Bama and neighbouring villages as a result of the attack on the commercial town of Bama stood at 26,391 at last count.

Ibrahim said the number is growing by the hour as there are still people trooping into Maiduguri from Bama and neighbouring villages of Konduga and Kawuri.

He said the agency has started making arrangements to ensure that they are camped in Maiduguri and provided with adequate relief materials.

Meanwhile, the Borno State Governor, Alhaji Kashim Shettima, has cut short his official visit to both Sudan and United Kingdom over the ongoing siege on Bama by members of the outlawed Boko Haram sect.

The governor who left the state late last week was expected to pay a visit while in Sudan and United Kingdom on school authorities and over seventy students recently sponsored by the State Government for medicine and Petroleum Geo-Sciences.

It was gathered that the governor on returning into the country, held crucial meetings in Abuja in connection with happenings in Bama and rest of the State.

The governor was also said to have approved the formation and release of funds to a committee set up to coordinate distribution of relief materials and management of victims.

The former media aide to the governor, Mallam Isa Gusau, revealed in an e-mail to journalists that: “Shettima returned mainly to provide needed leadership, be with his people, build public confidence, coordinate relief for victims, step up co-funding and psychological support for military.”

He revealed that the governor left the shores of Nigeria on Sunday night and was scheduled to meet officials at a University in Sudan where 50 female citizens of the State currently undergo state-sponsored degree programs to become medical doctors under the State Female Medical Education/Intervention Programme designed to train abroad, 300 female doctors in five years.

He also said: “Shettima was also to be in United Kingdom to meet 20 students undergoing Petroleum Geo-Sciences in addition to signing agreements for other human capacity development programs and a follow up meeting with a water systems company required for domestic use and irrigation agriculture in Borno aimed at boosting jobs creation as a strategy to discourage economic based recruitment by Boko Haram insurgents.