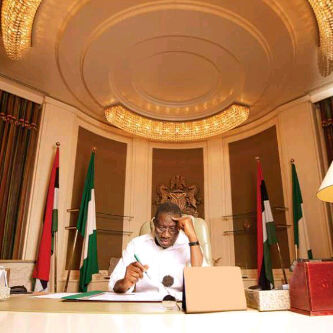 The Ijaw National Congress (INC) has again reinstated its support for the 2nd term ambition of President Goodluck Jonathan and has claimed that there is no stopping Jonathan from contesting the polls.

This remark was made by the Acting President of the INC, Engr Charles Ambaiowei during the inauguration ceremony of the new Executives of the Group’s Abuja chapter.

“Congress hereby strongly urge President Goodluck Jonathan to declare to contest for the 2015 presidential election now because delay in this regard is giving underserved impetus to groups like, the Northern Elders Forum, NEF, who declared that in case of the non-release of the Chibok girls by October, the President forfeits any option of re-contesting.

“The INC violently disagrees with the position of the NEF and further believes that their position can neither fall the heavens nor bring the Nigeria roof over our heads in this democratic dispensation.” Ambaiowei said.

Obviously displeased by the comments of the NEF, Ambaiowei further noted thus “Who is speaking from that tower of Babel? We are talking about a constitutional guarantee that the president has. And in as much as we are all deeply sympathetic and hurt that young girls are abducted and held hostage by cannibals in the form of the Boko Haram.

“That aspect of their not being released by our military and other security forces of this country, even though we know they have the capacity but we are only trying to minimise collateral damage. This minuscule issue cannot overshadow the overall achievements President Jonathan.”

“The records are very clear. And this is the reason why we cannot, and will violently disagree with the position of the Northern Elders forum.”

2015 Election: Buhari Shuns Attempt At Making Him Step Down