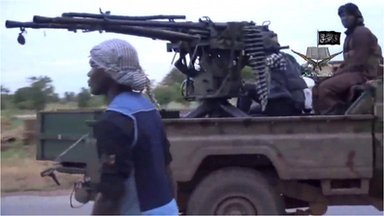 Insurgents of the Islamist terror group, Boko Haram, today made further advances in territorial grab by once more taking over Gamboru-Ngala, a key township on the border between Nigeria and Cameroon.

Today’s attack by a heavily armed contingent of the terror sect marked the second time Boko Haram fighters targeted and seized parts of the town.

In the latest operation, the insurgents first attacked and sacked an army barracks in Ngala before proceeding to Gamboru about three kilometers away. The sect took over the town without resistance from Nigerian troops.

In a response to the attacks, the Nigerian Air Force jet later dropped a massive bomb in the middle of Gamboru after hovering for several minutes in the air. The jet then left while the militants began a house-to-house raid in Gamboru.

A contingent of Nigerian troops was later seen massing close to a bridge earlier destroyed by insurgents during their first attack on Gamboru.

“If they completely capture the township, Boko Haram will be able to use it to transact economic and military business,” said the source.

He further explained, “The township will enable them [to] freely move arms into Nigeria in order to fortify their control of the seized territories they have declared an Islamic Caliphate.”

In a video released yesterday and obtained by SaharaReporters, the insurgent leader, Abubakar Shekau, stated that his group did not recognise Nigeria. Instead, he declared that the sect had established a caliphate, or Islamic geopolitical entity.

Among towns and areas under the sect’s control are Gwoza and Marte in Borno State, Buni Yadi in Yobe State, and Madagali in Adamawa State.