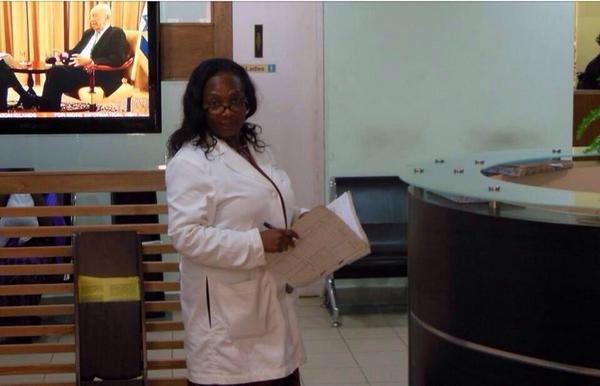 On 19 July, I spoke to Ameyo Stella Adadevoh, the senior Consultant Endocrinologist and Physician, who has just died of the Ebola Virus Disease (EVD), to schedule a previously agreed medical review. It was a Saturday. We agreed that I would come in the following Monday, July 21. On 20 July, Patrick Sawyer, the index case now thought to have brought EVD into Nigeria, was admitted into the hospital where Ameyo worked.

On 21 July, I attended the appointment as agreed. She had completed the rounds where she reviewed the cases, including Mr. Sawyer. She saw me shortly after mid-day. As always, it was professional and detailed. Unknown to me, Sawyer was already in the hospital. Unknown to her, he was already terminally symptomatic with EVD. We managed on that day to do my review and, curiously in hind-sight, fit in a conversation about life, death and dying.

As she would herself later narrate with her Chief Medical Director, Dr Benjy Ohiaeri, Mr. Sawyer, on admission “denied having been in contact with any person with EVD at home, in any hospital or at any burial.” So, on 21 July, Mr. Sawyer was being managed for Malaria. He had tested positive for Malaria parasites. It would take another day before the full possibility would hit home. By then, she’d probably already had fatal exposure to the virus.

But, once she struck upon the possibility that Mr. Sawyer was EVD-positive, Ameyo “immediately isolated/quarantined the patient, commenced barrier nursing and simultaneously contacted the Lagos State Ministry of Health and the Federal Ministry of Health to enquire where further laboratory tests could be performed as we had a high index of suspicion of possible Ebola Virus Disease. We refused for him to be let out of the hospital in spite of intense pressure.” Her suspicions proved correct.

That is Ameyo! If the occasion demanded it, she could be martial with care and sweeping in her command. She had earned her right to calibrated authority. The consequences could have been unfathomable if Mr. Sawyer had ended up in a General Hospital, for instance. It required someone with her capabilities and pedigree to be able to take the measures needed to firewall Mr. Sawyer and limit the contamination that he would have inflicted. For that, she paid with her life.

Ameyo became a doctor at 25. She had been my personal and family doctor for over 15 years. Her roots were both deep and grand. She is one of the few Nigerians the face of whose recent ancestor adorns one of our currency denominations. Her Great-Grand Father, Herbert Macaulay, is one of the most celebrated founders of modern Nigeria. Her father was himself a distinguished physician, academic and university administrator of considerable distinction.

Not that any of this mattered much to her. When Ameyo qualified as a doctor in 1981, I was still a kid in High School. Yet, I could get away with calling her “Ameyo”. To many of the children, she was “Auntie Ameyo”. She simply wanted to get things done, and done right. That was important to her: doing things right. In her field, Ameyo took no prisoners and tolerated no half measures. If you came to her with issues outside her field, she knew the experts to. If you showed up hoping to get worshipped, you were in the wrong shrine.

There was something about her directness, professionalism, commitment to knowledge and curiosity, and irreverence that made Ameyo deserving of respect well beyond the calling of the cloth. She loved her calling and was totally dedicated to it. When my kid brother died in June 2006, my Dad suffered terribly. She took charge of his management and inspired him to re-discover joie de vivre. While she battled for her life this past week and more, my Mum and Dad in Imo State joined in the legion of Nigerians who prayed and wished for a different ending. Like many people who had passed through her, Dad’s testimony is quite simple: “that woman saved my life!”

Nigeria is lucky that Mr. Sawyer ended up in the care of Dr. Ameyo Stella Adadevoh and the team she led. A less able lead or a less dedicated team could have let itself and the country down. Unlike many of her peers, Ameyo didn’t play god. Nor did she celebrate not having read any medical journal after Medical School. On the contrary, she knew her specialty and invested heavily in being up to date with the latest journals and skills in it. She was always honest about where the limits of her skills lay and would happily refer cases to colleagues with the requisite specialty whether in or outside Nigeria. She had one heck of a professional Rolodex!

All of us who had the privilege of ever having been managed or attended to by her would testify that this was a professional of exceptional thoughtfulness, ability, diligence, and application. The many colleagues whom she mentored or supported would too. We’ve all lost an outstanding person, support, redoubt, and professional. Ameyo had one of the sharpest minds you’d ever meet. She was at home discussing experimental physics, molecular biology, public health, lip-stick, the science behind bra-sizes, or different genres of music. She loved life. She was the mother of a son whom she loved more than life itself and lived with a mother to whom she was devoted. The void she leaves behind cannot be filled. They deserve our thoughts, care and prayers.

Because of the circumstances of her passing, there may be no grave to memorialise Ameyo. This is why we must give careful thought to how to do so. We must hold up and celebrate her example of selfless professionalism to the point of death. And, as a people, we must be grateful that someone like her is still in supply in our country. Ameyo always had the Hippocratic Oath hung in front of her on the left wall in her consulting room, just beside her certificate. I once asked her why? She said if you don’t believe (in) it you shouldn’t be here. She died true to her oath and calling. Our country owes her a debt we can never repay. She was truly and exceptionally special.

Chidi Odinkalu is the chairman of the National Human Rights Commission.