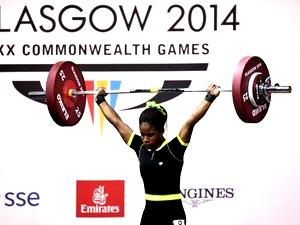 When I learnt that 16 year old weightlifter Ms. Chika Amalaha had won gold in the women’s 53kg category at the 2014 Commonwealth Games in Glasgow, I was happy, I was proud. That at least someone out there’s making our country proud. That some teen girl has risen up to redeem our image. And this is absolutely worth more than a thousand Washington based PR. I was glad that once more, someone’s now flying the green, white, green high on the world stage for good. Hahahaha! Where them world Press at? Hehehehe! Where them party holding? A little of #Chibok and a little of #Ebola. However, in no time, and a very short one indeed, I was proved wrong. And I felt real sad.

Now in as much as there is that burning desire to win a competition, the use of performance enhancers is a very bad idea. I would like to point out here, that one can only be proud to have participated in a tournament and not have had that opportunity to mount the podium, than having being recalled back and stripped of medals won. You’re are young Ms. Chika, very very young and this is definitely one bad start. The affiliation to banned substances: Steroids, Amphetamines Stimulants, Peptide Hormones, Human growth Hormone, and Insulin is a serious and difficult issue in sports, it puts an athlete’s health at risk, and most disheartening of all it threatens the integrity of clean athletes who would want to compete clean and adversely gives you an unfair advantage over them in the process; tainting the reputation of sports for what it is altogether.
To be consequently suspended and stripped of your title and gold medal after your ‘A’ and ‘B’ samples revealed traces of diuretics, masking agents, and prohibited substances, from results of a lab test in London, is a testament of the fact that these substances can only succeed in ruining one’s career, life and self esteem. But I need to truly understand what led you to dope. Was it your choice? This, which carries severe significant moral considerations. Who permitted you to make this choice? Is your coach culpable? Are your parents in the know? Can it be love for country? Is this your first? Maybe, we shouldn’t ban performance enhancing drugs in sporting competitions? But methinks drugs and other performance enhancers do not reflect the forms of human excellence which sports are tended to honour for centuries.

Sports has for long been a unifying element in a divided world. And a relief balm in a hostile planet. Therefore it is integral to the nature of sport itself that we the spectators and you the participants can be very confident and rest assured that any such competition is clean and free from dope, peddlers and dopers. It’s no fault of Amalaha, when modern sports competitions place little emphasis on the means of accomplishing any feat but with eyes widely open on the end of a bout – win, no matter how. Marion Jones, former American Olympic track and field champion readily comes to mind. After Sydney 2000, she was tested positive to performance enhancers and forfeited all titles and medals won. She ended up putting in some time at a federal prison. In 1991, former world star and Argentine super footballer Diego Maradona was busted in a drug test, and received a 15-month ban, which ended his days in the Italian league. He also never returned to play for Napoli. Ever heard of Lance Armstrong? Try doing a Google search and see what comes up. The jerk here is that, don’t do drugs, and they won’t strip you. No matter how long it takes, you will definitely be pulled up one day. And that will be a hell of a sad moment for you and everyone who’s not told you the truth. Because If a teenager starts out cheating at this young age they will never be able to stop because of the addictiveness the drug will have on them.

This is a very pathetic situation one can be in, and also a critical moment toward for all forms of sport. Doping affects all levels of athletes and for women the side effects for a start are a gradual hair loss (baldness – I noticed you’re very hairy), hypertrophy of the clitoris, increased sex drive, irregularities of the menstrual cycle, development of masculine facial traits, increased coarseness of the skin, and premature closure of the epiphysis. And just in case, you might have a brother who’s into sports or probably weightlifting, banned performance enhancers can have negative side effects too. For beginners, they are acne, impaired liver function, impotency, breast formation (gynecomastia) increase in estrogen, erectile dysfunction, increased sex drive, loss of hair (baldness) and lots more.

To protect the integrity of sporting events, and to maintain it’s popular appeal, the health of athletes, and young aspiring sports people world over, we need a targeted, articulated, well-tailored and comprehensive approach, to the fight against the use of banned performance enhancers and substances. It’s worthy of note to know that young sportsmen and women continue to push the boundaries of excellence in performances – breaking new world records, straining self and achieving unfathomed feats. Toward this end, are more certified and justified training methods and technologies to help out determined individuals. For never have sportsmen and women had more training and competition aids at their disposal than now. An example is the goal-line technology introduced for the first time at the 2014 FIFA World Cup in Brazil. And as efforts are being constantly made to ensure that sports can once again be played with the “true sportsmanship spirit”.

It is now a collective task for countries and participants to help the World Anti-Doping Agency (WADA) as it promotes, coordinates and monitors the fight against doping. And hence, sincere help is also needed in jointly maintaining the pride of participation and competition. A very strong deterrent will be set if funds, research and cooperation, governments and corporations contribute together with positive incentives for a drug-free world of sports. The different levels of pressure placed on athletes to perform better. The fierce competitive nature of the modern sports’ world, in combination with society’s demand for excellence, has caused them to seek alternative means to enhance their performance. However, competitors are known to face an increasingly difficult choice: to dope to enhance performance or to accept what could amount to a competitive suicide. One choice, which of course, our 16 year old weightlifter, Ms. Amalaha just made.

The writer, Raymond Inkabi holds a B.Tech (Hons) in Geography from the Federal University of Technology, Yola. He tweets via @alykka on twitter.