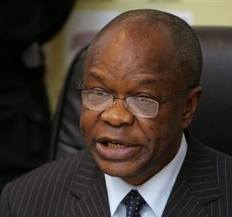 President Goodluck Jonathan has just named Maurice Iwu, former chairman of the Independent National Electoral Commission (INEC), as a member of a committee charged with shaping Nigeria’s response to the widening scare of the deadly Ebola virus that has so far claimed more than 700 lives since its latest outbreak. The virus had claimed its largest tolls in Liberia, Guinea and Sierra Leone, with a few cases in Ghana and one confirmed death in Nigeria.

Mr. Iwu’s appointment to the committee comes shortly after the controversial former electoral umpire claimed that he had made a breakthrough in the treatment of the virus, using an extract found in kola nuts. The claims by Mr. Iwu, an erstwhile professor of pharmacognosy—a branch of pharmacology that deals with medicinal substances in plants—have found no collaboration in the scientific community.

Mr. Iwu first stated in the 1990s that he had collaborated with other scientists to discover a cure for the Ebola virus that then ravaged the Congo. Despite garnering more than $2 million in research funds, Mr. Iwu and his research team were not able to develop any drug to fight the debilitating and incurable disease.

“The group does not have a limit to its work,” Mr. Chukwu said. “The members will continue to work until there is [a] result.”

“However, in vitro research showed that some extracts from bitter kola tend to have some activity against the virus. The research was not concluded. I want to restate that taking bitter kola does not stop Ebola Virus Disease.”

The Ebola committee’s broad mandate means that Mr. Iwu would be part of a group that may be vetting his own uncompleted research work and unverified claims.

IYC Rejects Posting Of Ijaw Youths To The North