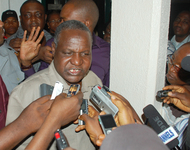 I was in Ghana last Friday when a massive campaign against the worsening economic conditions in the country occurred.

The day was known as Red Friday and several thousand activists marched through Accra that 24th July, the second anniversary of the death in office of President John Evans Atta Mills. It will be recalled that his then Vice-President, John Dramani Mahama, took over amid a wave of sympathy, then went on to narrowly win the 2012 elections. President Mahama has encountered a steady surge of criticism since then with inflation currently running at 15% and the cedi has lost 30% of its value against the US dollar over the past year.

The Red Friday campaign was organised by the Concerned Ghanaians for Responsible Governance in conjunction with the Trades Union Congress (TUC), representing 18 national unions in transport, education, health services and mining. Currently, polytechnic teachers and nurses are on strike over unpaid salaries and allowances and there is a widespread concern over the cost of living.

The Red Friday Movement in Ghana, which began on social media, has escalated within a month. Its first demonstration was on 1st July, Republic day and they marched on the seat of government at Flagstaff House where they presented a charter of demands for more reliable and less costly water and power supplies, lower fuel prices, more job creation schemes, a stronger cedi and a crackdown on corruption. It was this type of joint concerted action between trades unions, associations and the progressive movement that has always been the source of Nigerian nationalism and our nation-building project, which we have lost today.
The last time we had such a movement was in 2012, following the New Year day fuel increase by President Jonathan. Rather than Nigerians enjoying the breath of fresh air he promised, Nigerians saw suffering rising costs for transport, food and other essentials escalated. Almost immediately, protests developed all over the country and the NLC, TUC and civil society stepped in to give direction and leadership to the protests. The anger was real and had been brewing for a long time. The price of petroleum products had been increased eighteen times prior to the January 2012 increase over a period of 26 years. Each time it had occurred, Labour has provided leadership for protests and forcing government to at least reduce the rate of increase.

Part of the anger in January 2012 stemmed from the decision of President Jonathan to stop the then on-going consultations with stakeholders and take a unilateral decision on the issue. Nigerians also knew and believed that the ‘subsidy’ amount, which was indeed huge, was simply the greatest fraud in our nation’s history as most of the money was lost to corruption. The fuel subsidy protests grew rapidly into an occupy Nigeria movement until it was stopped abruptly by the capitulation of labour on 12th January 2012. The “capitulation”, it was rumoured, was oiled by huge bribes given to labour leaders. That was the last time the Nigerian labour movement was involved in any progressive engagement. The Abdulwaheed Omay NLC then focused its energies on other issues, to which we will return.

The pact between labour and progressives to fight the Nigerian cause first emerged with the Cost-of-Living-Allowance General Strike of 1945. The labour movement with support from progressive nationalists sustained a general strike by 30,000 workers for 37 days. The railways, posts and telecommunications and general colonial administration were completely paralysed. The following year, the trio of Herbert Macaulay, Michael Imoudu – Labour Leader no. 1 and Dr Nnamdi Azikiwe formed a common front to mobilise Nigerians to demand for self-government visiting 45 towns all over the country. While in Kano, the veteran Herbert Macaulay died at the ripe age of 82. In his funeral in Lagos, Azikiwe reminded the nation “Macaulay has left us an imperishable legacy, the struggle for the attainment of social equality, economic security, religious tolerance and political freedom… Let us perpetuate his ideas of freedom, they can be realised in our life time”. This was the tradition maintained by labour leadership through the times of Wahab Goodluck, Dapo Fatogun, Hassan Soumonu, Liman Chiroma, Pascal Bafyau and Adams Oshiomhole. Over the decades, labour, students, ASUU and progressive intellectuals have repeatedly come together at moments of national anguish and political repression to lead protests that have revived belief in a better future for the country. This is the tradition that has been halted by the Omar leadership of the NLC that has broken the pact with the progressives and maintained a “sidon look” attitude as economic crisis, poverty, insecurity and malgovernance continues to grow. The result is that the only “champions” out in the field today are the religious bigots, ethnic jingoists and mega thieves of the national treasury.

The only bright spot over the past few months has been the #BringBackOurGirls Movement which has maintained a steady patriotic and humanist campaign to end terrorism and obtain liberation for the Chibok girls that were abducted by Boko Haram. By continuing to make accountability demands on Government, the Movement has succeeded in keeping the authorities on their toes. It is interesting that Omar, the NLC president is from the Nigerian Union of Teachers, a union that has lost a total of 173 teachers to Boko Haram attacks in Borno and Yobe states over the last three years.
In spite of this, Omar’s NLC has refused to align itself with the plight of his NUT colleagues or the BringBackOurGirls Movement. He remains focused on keeping quiet and negotiating for a large NLC estate from the FCT administration. The result is that NLC is dying as a political movement that provides convening power, leadership and direction to progressive causes in the country. My good friend Issa Aremu who is Deputy President of the NLC has however remained steadfast in trying to lend support and comradeship to the BringBackOurGirls Movement.

As terrorism spreads and strengthens itself and ethnic jingoists and religious bigots continue to occupy our social and political space, it is imperative that progressives wake up from their slumber and provide leadership for the struggle for the attainment of social equality, economic security, religious tolerance and political freedom. As the Great Zik said during the funeral oration on Macaulay, we must never give up on the imperishable legacy he has left us of the struggle for freedom and social justice.

Dr. Jibrin Ibrahim, a senior fellow of the Centre for Democracy and Development, CDD, and also Chairman of Premium Times editorial board, is in Ekiti as an election monitor.