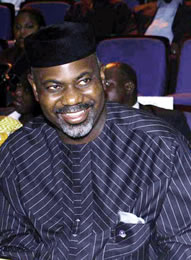 The Cross River State Governor, Senator Liyel Imoke, has decline seeking for an elective office after his second term as governor by year 2015.

The one time senator at the National Assembly, Minister of Power under the Olusegun Obasanjo administration gave the explanation at a public lecture organised by Destiny Group to mark his 53rd birthday at the Cultural Centre, Calabar.

A transcript of why Imoke said he isn’t interested in continuous elective office: “It is only leaders who feel insecure and are looking for where to hide after leaving office that think of the next elective office while they are still in their current position.” he said.

The governor explained. “As the end of my term as governor continues to count, I look forward to it with joy and satisfaction. I will leave with peace and utmost satisfaction. A lot of people keep asking me, ‘Oga, are you not going to contest for an election when you leave as governor?’ I tell them that I will leave office with so much peace and satisfaction that I will not contemplate running for another office. It is only those who are insecure and are looking for where to hide that plot for the next office even when they are yet to serve out their current term,”.

“I strongly believe that as leaders, if there is one thing we must do as a matter of deliberate policy, it is to build a new generation of leaders. If we keep moving from or running in one office to the other without creating opportunities for a younger or a new generation, then society will never evolve and there will be no purposeful leadership.”

The governor re-echoed the decision of the state chapter of the Peoples Democratic Party (PDP) to zone the governorship in the 2015 election to the Northern Senatorial district,and urged the people to look for a candidate who will  render purposeful leadership.

“As we collectively look for our new governor from the Northern Senatorial District, we must do so in the hope that he or she will give us purposeful leadership and development.”

“Voter Cards On Sale For N10,000” Osun Commissioner Cries Out