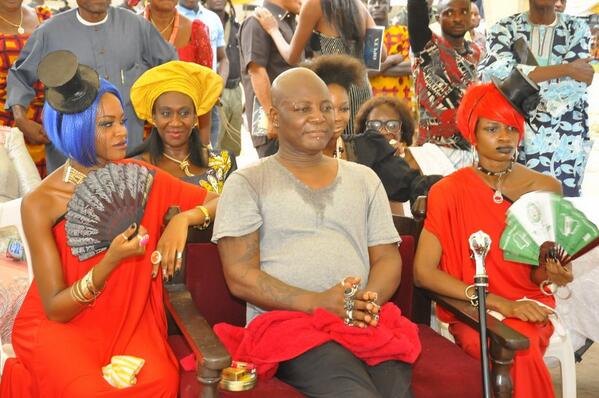 Hey! come and see Nigerians all over the world, holding Oputa Panel on top of my fathers burial. Kassala deyooooo.
My father’s burial may have come and gone, but tongues are still wagging about all the drama that went down. No be The CharlyBoy Show? I must confess that my pop’s burial was the biggest show I ever put together in all my years as an event organizer; it also turned out the biggest burial show across the Niger. Who wan try. Abegi! 3Gbosa for the man wey sabi.

From New York to London, Sweden to Helsinki, India to China, the trending topic was how “CharlyBoy snatched the microphone from Rochas Okorocha, the Governor of the state of Imo”.
Comments flying in different directions about what happened, the people involved, the controversies, the virgins…Kai.

People ask why CharlyBoy is who he is. Why have two days of musical concerts after the death of his iconic father? Why argue or fight a sitting governor – doesn’t he fear the veto venom of a man in power? Why walk around with 6 feet tall, provocatively clad girls wearing bizarre wigs in public, even in the presence of God, his wife and the dearly departed? For some reason, the last one elicits more provocation than most questions about my dear alter ego, CharlyBoy.

Funny how envy, anger, timidity, mongopark mentality, hypocrisy and sycophancy have crippled the minds of many of my brothers and sisters. Oh my God!

A lot of people in Nigeria live in fear and express it through anger, jealousy and spite – everything acceptable; than actually having the courage to face that fear and be the person they really were made to be. Me I no send. The CharlyBoy brand is me doing my job well – it’s an image, a character invented to shake monotonous minds from their daily doldrums and pull them away from the comforts of the familiar, just for a while. All we have seen from pictures and videos from the weeklong event is more than enough to stir excitement and controversy – good and bad.
Let me warn: those who are easily shocked should be prepared to be shocked even more and more often.

I have been called everything from a cheap publicity monger to a cult leader. Those “Charlys Virgins” whose tests are yet to be confirmed have been identified by busybodies as my grand-daughters, spiritual wives, satan’s handmaidens. Hummmmmm! Big deal. I have always known that insecure people put up boundaries but confident ones tear them down. Spiritual people have church picnics.
The kind of ass-licking and shit-eating that goes on in Imo State is for lack of a better word, infuriating and obnoxious. Chai there is Godooooo.

How did the Day of Tributes organised by the Imo State Government on behalf of the great Justice Oputa turn into a political campaign front and a seminar in ass-kissing? Why would anyone expect me to sit down and listen to politicians begging for goodwill from the governor while using the memory of my late father as an opportunity? What an insult on his name! God punish them die. The Imo State government has no shame anymore, the sycophants and megalomaniacs calling themselves leaders whose pictures litter every street corner and roundabout in Owerri begging for a second try at doing nothing who exchange naira for loyalty. Claps in the Church of God is not what would get you re-elected, my brother Rochas, bear that in mind.
The interesting thing about all this is that the people, the ordinary men and women that Imo government is supposed to, yet refuses to serve, are the ones hailing the AreaFada, why? Could it be that the poverty-stricken Imolites are hailing The AreaFada because they feel battered by the mental rape committed against them by their leaders and yet, are afraid and feel powerless to defend themselves, to fight back? I am especially referring to the men and women of Oguta who are not just powerless, timid and foolishly arrogant but refuse to seek any control of their lives from the government. They just sit there and survive, suffering and smiling sheepishly.
How can an entire town, the Blue Lake city, go without electricity for good six years and not do or say anything about it? Not six days or six months, but SIX YEARS!! After all the promises that Rochas gave of giving Oguta electricity for a few days for the Justice Oputa funeral, we did not see even a flash of electricity.
These my home-town people, in my opinion, are polluted and disillusioned by their false arrogance from being well positioned in the 1930s and 40s when they traded with the white man, when they had UAC and John Holt and did good business better than the people in the hinterland. Those were the good old days, gone with the wind. Even as an oil producing community, what do they have to show for it? Politically, they are wanting, socially they are timid; many of them inundated by fear and poverty. They may have thought themselves to be something six decades ago, but are nowhere politically in this decade, not even one Imo State cabinet member is from Oguta. Tufiakwa!

I am sure that this was one of the reasons some cousins of mine decided to go looking for Rochas Okorocha to beg for forgiveness on my behalf. Who send them? That’s how they got to Imo State government house without seeing the governor. After the governor’s aids sized them up, they concluded that they were only a hungry bunch of PIRATED Oputas. Shebi, they came back with their tail between their legs, shameless souls! Desperate mongrels looking for a piece of leftover rotten flesh wherever they could hound. Their plans failed, woefully. People who swallow pain killer for someone else’ headache! Can you imagine, apologise for what?

Truth be told, I come from a good pedigree, trained by a great man. I know the law and can’t be caught dead breaking it. Upon all my ruggedness, there was no way, I, Charles Oputa, would have snatched a microphone from someone speaking no matter how much I hate what the person does. I get sense, am cultured and I went to one of the best universities in the world. I am not a riffraff, neither am I a gutter ass like some of these so called leaders.

At the very least I’m honest about my identity (CharlyBoy), proud about my upbringing and courageous in the face of crippling doubt about my brand. I am however confident in the fact that I’m doing one thing many will never accomplish in their short time on earth: leaving a legacy, just like my father did. So park well.
There is a method to my madness only understood by deep thinkers, not sycophants and bootlickers. The difference between my darkness and yours is that I can stare my own badness in the face and accept its existence while you are busy covering your mirror with white linen sheet. The difference between my sins and yours is that when I sin I know I’m sinning while you have actually fallen prey to your own fabricated illusions.

If it makes people feel good calling me a devil worshipper and a thug, when the very great Justice Oputa trained me and finally doffed his hat for me and decided to preach the gospel of Charlyboyisim before he died, mere mortals can go hug a transformer. I have a name that is knock on wood. Anything you say, for your pocket.
I am free, no matter what rules surround me. If I find them tolerable, I tolerate them; if I find them otherwise, I break them. I am free because I know that I, alone, am morally responsible for everything I do. It’s discouraging to think how many people are shocked by honesty and a few by deceit.

Instead of wallowing in the bile of hypocrisy and envy, why don’t we search ourselves and consider the deeper actions beneath all the pomp and pageantry twisted and manipulated by the media? Is that prickly sensation in your heart righteous indignation over the Oputa Funeral, or just mere heartburn?
Check yourself – hypocrisy doesn’t just wound, it kills permanently.

Written By Charly Oputa aka Charly Boy Oputa, aka Area Father.. He is the eldest son of the late Justice Oputa.

Opinion: Tinubu Vs Yoruba Obas, The Challenges Of A Hero

Opinion: Tinubu Is Not Aregbesola’s Only Albatross