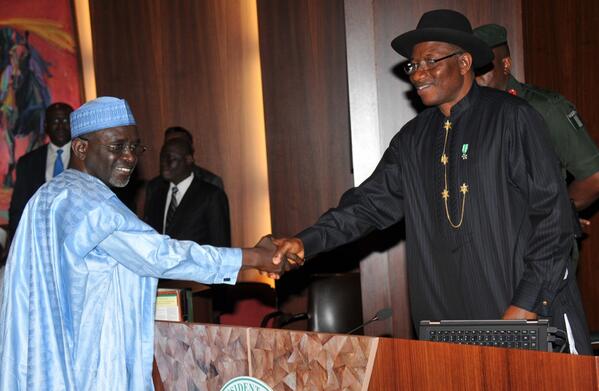 President Goodluck Jonathan has sworn-in the four new ministers, who were cleared by the National Assembly and the former Kano governor was appointed to manage Education Ministry. Shekarau was before now a Chieftain of Nigeria’s opposition All Progressives Congress, APC before defecting to the ruling People’s Democratic Party, PDP.

The President announced Mr. Shekarau as the new Education Minister; Mr. Adeyeye was named Minister of State for Works; Mr. Oru, Minister of Niger Delta; and Mr. Bulama, Minister of Science and Technology.

The current Minister of Works, Bashir Yuguda, will now be the Minster of State for Finance and substantive Minister of National Planning. While Mr. Yuguda is filling the vacancy created by the exit of the former minister of state of finance, Yerima Ngama.

The President who congratulated the ministers for the appointment had to say the following.

“You have no time to sleep, unfortunately for you because first you have to learn how to climb the ropes, because maybe it is a different setting, no matter how experienced you are if you go to something different you will need some time to adjust.”

“But from your background we know that all of you are eminently qualified to be here and we know that it will not take you too many hours to settle down. We believe that you will perform not just to satisfy Mr President but to satisfy Nigerians.

“You are not just serving the President as a principal aide, but you are serving our motherland and in this we will expect the best from you especially at this time when there is global competition” he concluded.