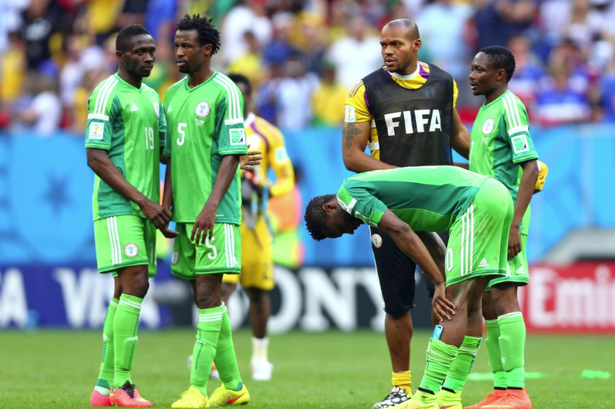 Nigeria has been suspended from all international football amid allegations of government interference in its football federation.

Fifa announced the ban, which means no Nigerian team – including club sides – can play internationally, on Wednesday evening.

It was the world governing body’s response to a court order which compelled the Nigerian Minister of Sports to appoint a senior member of the civil service to take over the running of the Nigeria Football Federation.

A statement from FIFA’s emergency committee said: “The Fifa Emergency Committee has decided today, 9 July 2014, to suspend the Nigeria Football Federation (NFF) with immediate effect, on account of government interference.”

The statement continued: “The decision follows a letter sent by FIFA to the NFF on 4 July 2014, in which it expressed its great concern after the NFF was served with court proceedings and consequently an order preventing the president of the NFF, the NFF Executive Committee members and the NFF Congress from running the affairs of Nigerian football was granted by a High Court of the Federal Republic of Nigeria.

“The said court order compelled the Nigerian Minister of Sports to appoint a senior member of the civil service to manage the NFF until the matter was heard in court, without giving any date for such a hearing.

“Originally, an elective congress had been planned by the NFF to take place on 26 August 2014.

“The suspension will be lifted once the court actions have been withdrawn and the properly elected NFF Executive Committee, the NFF general assembly and the NFF administration are able to work without any interference in their affairs.”

The first impact of FIFA’s move will be felt by Nigeria’s women, who will be prevented from taking part in the FIFA Under-20 Women’s World Cup in Canada next month – should the suspension not be lifted by July 15.

The statement added: “As a result of this decision, no team from Nigeria of any sort (including clubs) can have any international sporting contact (art. 14 par. 3 of the FIFA Statutes).

“During the period of suspension, the NFF may not be represented in any regional, continental or international competitions, including at club level, or in friendly matches.

“In addition, neither the NFF nor any of its members or officials may benefit from any FIFA or CAF development programmes, courses or training during the suspension period.”

Nigeria’s men reached the second round of the World Cup finals in Brazil after finishing second in Group F behind semi-finalists Argentina, but bowed out after a 2-0 defeat by France in the last 16.