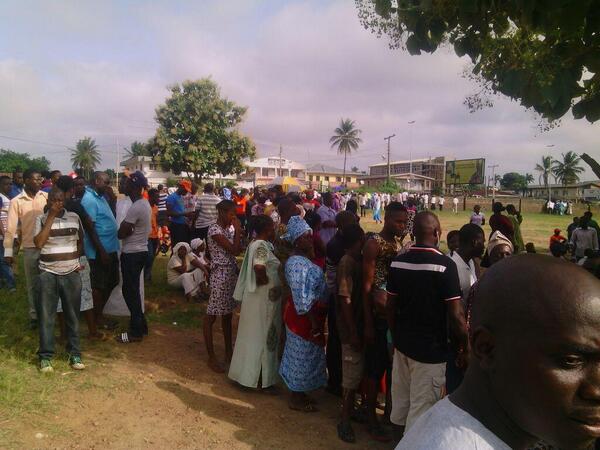 Stomach Infrastructure, this is the new maxim, the new political ideology given to us by Ayodele Fayose, the governor elect of Ekiti State.

By the time Fayose would write his memoir, he would give further clarifications to the peculiar background that inspired this concept which is now receiving wide acclaim nationwide. But, before then, one point must be noted: that the victory of Fayose over the incumbent Governor Kayode Fayemi in the June 21 election was driven under the plank and framework of Stomach Infrastructure.

What then is stomach infrastructure as against material infrastructure? We can only understand stomach infrastructure by making a graphic comparison between the two concepts, because they are all goals of democracy. The contrary is that one cannot be emphasised over the other. One cannot be given more attention than the other.   Material infrastructure is the vision that Fayemi religiously pursued in Ekiti. It is an elitist dream of building projects – big classroom blocks with ICT Centres, big housing estates, big roads, big hospitals with world class equipments, big multi-purpose centres, big banks and industries. Good vision, good dream!

But, stomach infrastructure looks down to the people’s immediate needs: empowerment programme for unemployed youths and widows; maintenance assistance to the aged; health foundation to assist the poor; agric facilities for the rural poor farmers; skill acquisition centres for poor unskilled men and women; loan grants to enable them take off in little measure; direct food relief for the poorest of the poor; borehole in rural communities to solve water scarcity problems; establishment of small-scale cottage industries in the villages where the rural community can work and also acquire experience on how to produce minor things.

The judgment of the people of Ekiti is that Fayemi built material infrastructure and ignored stomach infrastructure. While he was confident that he has performed and delivered on his promise of providing democracy dividend, the people disagreed because they cannot enjoy the mighty infrastructure while their stomachs were squirming with hunger pangs. A hungry man is an angry man, a very unhappy fellow. So the first greatest needs of man is food and security. This fact was lost on Fayemi for the four years he spent in Ekiti building the mighty fortresses and the big material infrastructure.

The moral is that you have be alive, healthy and happy to enjoy the big infrastructure and that is why the need for food and shelter come first before comfort and social recognition in Abraham Maslow’s hierarchy of need. A dead man cannot live in a mighty fortress. He can only rest in a six-foot grave. This is the reason the new maxim is causing ripples all over the place, because it touches on the heart of the common man. A leader could not have satisfied his people if he builds mighty schools and hospitals and yet, the people cannot afford to send their children there and cannot afford the high medical bills of such glorious hospitals. There must be a point of convergence between material infrastructure and the lowly capacities of the masses and this where the concept of stomach infrastructure becomes very relevant.

Indeed, the Ekiti scenario is an eye-opener to leadership in Nigeria. The challenge is for leadership to be able to prioritise on the needs of the citizenry. Every leader that continues to pursue idealistic visions at the expense of the very immediate needs of the common would end up like Fayemi. Since politics remains a local affair and the people who actually sacrifice their blood and energy to ensure victory for the political aspirants remain the local masses, these ordinary people will continue to give the verdict at the polls.

The lesson is that there must be a balance between idealism and pragmatism. A great leader must be high in ideas and lowly at heart. As Shakespeare noted in Julius Ceaser, the ‘abuse of greatest is when it disjoins remorse from power” . He must be the polish cosmopolitan man of the polite society, and the rugged man of the local village bar. He must be able to live out the chivalrous life of protocols, ceremonies and courtesies and at the same time display the humility of dinning with beggars and people of the lowly trough of life. He is the leader of all men and, therefore, must appreciate the varieties of our common humanity.

In the case of Ekiti, Fayemi only satisfied the members of his own class, the elite, the intelligentsia , his fellow Phd holders and spoke the language of the intellect while ignoring the humourous jibes at the local bars of Ekiti forest. But, on June 21, a bewildered man looked back and he could see the members of his class. They could not leave the comfort of their hotel suites to queue on the sun. Only the commoners came to judgment and they judged according to whims of their hearts and minds. They voted to restore their soul.

Stomach Infrastructure is about our survival, first and foremost. It is about following the natural sequence of things in governance. It is about understanding the bottom-top, gradual approaches in developmental strides. It is about carrying everybody along, everyone in his own pace.

Fayose has given us a topic for Ph.D desertation.

Opinion: Why PDP Thinks It Can Win Osun