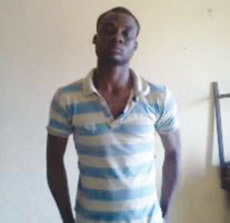 The 21?year?old Redeemer’s University undergraduate, Tolani Ajayi, who killed his father, a Senior Advocate of Nigeria, Charles Ajayi, last Thursday, has said it was his late father that provoked him.

Tolani who killed his father at their Canaanland Street home within the Redemption Camp along Lagos-Ibadan Expressway, Ogun State was facing a disciplinary committee in the school over drug-related issue, before he committed the crime .

The 300-level student of Department of History and International Relations, spoke with journalists on Tuesday at the Police Headquarters, Eleweran, Abeokuta , where he was being detained for the crime.

He said, “Go and read the statement I made to the police.”

“My father went to the kitchen and got a stick (wooden spoon) he used it on me repeatedly and I tried to defend myself, then he bit me on my shoulder and I got angry.”

“I used normal small kitchen knife, then, I used cutlass to attack him. I regret the action.” He revealed that only himself and the late father were at home at 1:00 am when the incident happened while his mother was in Abuja.

When asked whether his parents lived together as husband and wife, Tolani said “We lived in Abuja, I schooled in Camp, he came for a programme, then, my school was on break, so, I went to meet him, we were meant to go back to Abuja together, then, the incident happened and I am here.”

Tolani who said he knew by his action, he has offended his mother, added that he has sent some people to beg her on his behalf for forgiveness.

He said, “I know my mother is still grieving, and I want to give her time. But I have sent some people to talk to her that I am sorry, and that she should forgive me. I have talked to my sister.”

When asked whether he was under the influence of drugs when he committed the crime, Tolani who confessed that he has been into drugs, said, “I tried those drugs myself. I might have heard it from my friends but, I tried it myself.

“There is no way Nigerians can help me I am going to face my judgement, I am meant to pay for what I have done. It is not as if I am ready, it is something that is inevitable, something that is going to happen, I am just waiting for it.”

Jonathan May Move Nyesom Wike To Niger Delta Ministry Or…….