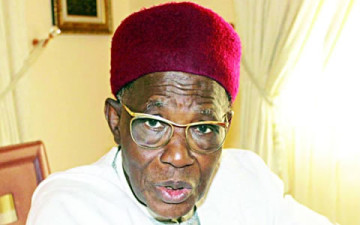 This week, I will tie my admonition for this column with the story of Ghandi…

When Gandhi was studying law at the University College of London, a professor, whose last name was Peters, disliked him intensely and always displayed prejudice and animosity towards him.

Also, because Gandhi never lowered his head when addressing him as he expected, there were always “arguments” and confrontations.

One day, Mr. Peters was having lunch at the dining room of the University, and Gandhi came along with his tray and sat next to the professor. The professor said, “Mr. Gandhi, you do not understand. A pig and a bird do not sit together to eat.”

Gandhi looked at him as a parent would a rude child and calmly replied, “You do not worry professor. I’ll fly away,” and he went and sat at another table.

Mr. Peters, reddened with rage, decided to take revenge on the next test paper, but Gandhi responded brilliantly to all questions.

Mr. Peters, unhappy and frustrated, asked him the following question. “Mr. Gandhi, if you were walking down the street and found a package, and within was a bag of wisdom and another bag with a lot of money, which one would you take?” Without hesitating, Gandhi responded, “The one with the money, off course.”

Mr. Peters, smiling sarcastically said, “I, in your place, would have taken the wisdom, don’t you think?” Gandhi shrugged indifferently and responded, “Each one takes what he doesn’t have.”

Mr. Peters, by this time was fit to be tied. So great was his anger that he wrote on Gandhi’s exam sheet the word “idiot” and gave it to Gandhi.

Gandhi took the exam sheet and sat down at his desk, trying very hard to remain calm while he contemplated his next move.

A few minutes later, Gandhi got up, went to the professor and said to him in a dignified but sarcastically polite tone, “Mr. Peters, you signed the sheet, but you did not give me the grade.”

For those old enough, or well read in Nigerian history, how could you not know Umaru Dikko…

One of the most comprehensive work I ever read on the Dikko saga is “Diplomatic Baggage MOSSAD and Nigeria: The Dikko Story” by Kayode Soyinka. I read the book in year 2000, six years after it had been published and 16 years after the saga.

The book reads exactly like a le carre thriller and indeed that is what it is, in summary it’s the story of Dikko’s battle for asylum, a shrewd analysis of Nigeria politics, and exclusive interviews with Dikko himself.

So when his death was announced last week, I quickly referred to my library and did another quick read, in the light of contemporary Nigeria, and what hurt most is that really nothing had changed, nothing seems to be changing and nothing may infact change.

From the Dikko that was almost bungled in crate to Nigeria, almost beaten up in a constitutional tea party by now equally late Ojukwu, to the fact that we are still part of another dialogue lunch in the name of confab, only baffled me more.

Of Dikko, Gowon said, “He was a very good person. He was a very effective minister; it was not his character what newspapers made him to be. The ACF said he was “principled and colorful politician of repute. David Mark said, “he was a political strategist who contributed to the political evolution of Nigeria”

In this part of the woods we do not speak evil of the dead…sadly also we know little of the dead too.

Was Umaru Dikko of the presidential commission on rice a thief, a corrupt man, or simply Dikko the Mathematician, broadcaster, or is he in the words of Jonathan the elder statesman, who made great contributions to national development.

Or is he the man that only three out of ten Political science students of a federal university I sampled knew anything about. Infact one asked if he was a soldier…yet he contributed to national development.

Who really was the Umaru Dikko that was called to the Bar at the Middle Temple in 1991, was he the same man that was part of a government that literally was importing sand from Italy, is he the same man that British TV-viewers switched to their afternoon bulletins on July 5, 1984 astonished to learn of a kidnap in broad daylight affluence laced London street within half a mile of Kensington Palace.

Is it same Nigerian soldiers that have excelled in foreign missions and behaved well that burned BRT busses and beat up citizens because a colleague was hit by a BRT bus (certainly not on intention)?

Is it the Nigeria of Soyinka and Achebe, Anyaokwu, Maitama Sule and co that have produced Farouk Lawal, Stella Oduah and co. Is it a case of the good, worse and very ugly.

Is it Umaru Dikko’s Nigeria, or we are just one diplomatic baggage whose seed of discord and disunity was sown right from inception. Is it that since the Umaru Dikko palavar till his death the only problem we have is changing Nigeria’s name to ‘aiger’ or some antibiotic sounding name?

Is it not safe to conclude that we have beaten all the records of corruption set during the Dikko days so much that we owe that era an apology?

In one of his interviews in 2004 in the Guardian newspapers, I picked this gem, and it summarizes the controversy that Nigeria is, Dikko speaking on money in politics had this to say, “The problem with our country comes from one particular sources more than any other sources. The problem that is facing us today in Nigeria is that our minds have been monetized, our people have been monetized and people don’t think of any other thing except money. Today, it is money that matters in everything even when people are offering prayers, they will be asking God for money. They do not ask for forgiveness of their sins, they are not asking for peace in the country, it is only money.”

Umaru Dikko is gone, millionaire in a crate, good man or not, intelligent or misunderstood, corrupt or otherwise. He has gone the way of all mortals. All is vanity; his death again serves as a reminder to the looters in high and low places. What do we want to be remembered for, or how do we want to be forgotten, as a Ghandi, Dikko, Mr. Peters, or an idiot—Only time will tell.