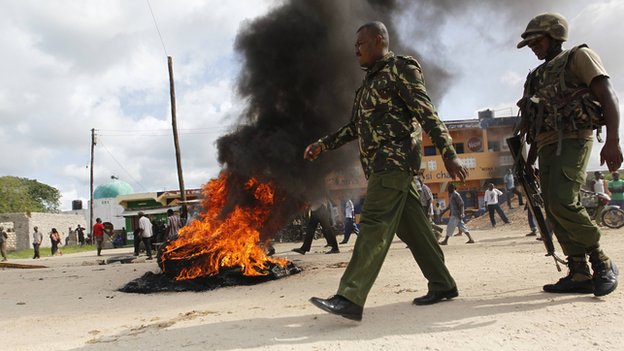 Kenyan police have arrested the governor of the coastal Lamu district in connection with three recent massacres in which over 60 people were killed, officers said Thursday as reported by Agency France-Presse.

Governor Issa Timamy was arrested late Wednesday in connection with killings last week over two consecutive nights in the town of Mpeketoni and a nearby village that claimed nearly 60 lives. Another attack this week left at least five dead, officials said.

“The governor is in custody,” Kenya’s Criminal Investigations Department chief Ndegwa Muhoro said, adding he was due in court Thursday.

“There are various charges lined up for him that are related to the attack,” he said, without giving further details.

Despite an immediate claim of responsibility from the Al-Qaeda-linked Shebab for the Mpeketoni attack, Kenyan President Uhuru Kenyatta has blamed “local political networks” along with an “opportunist network of other criminal gangs”.

The accusations have stoked already tense political rivalry between Kenyatta and opposition parties.

Timamy is a member of the opposition CORD party, the Coalition for Reforms and Democracy.

Survivors of the attack in Mpeketoni reported gunmen speaking Somali and carrying Shebab flags, executing non-Muslims and saying their actions were revenge for Kenya’s military presence in Somalia as part of the African Union force fighting the Islamists.

An interior ministry statement said those detained were plotting “ethnic cleansing” attacks and were members of the Mombasa Republican Council (MRC), which campaigns for independence of the coastal region.

After the attacks, Kenyan security forces killed five people they suspected of involvement in the massacres, recovering AK-47 assault rifles as well as ammunition.

Three others have also been charged in connection with the killings, including a police officer, the owner and driver of a vehicle used by the attackers, and a suspect accused of running fake Shebab social media accounts.

Sudanese Woman Freed From Death Row, Re-arrested At The Airport With Family Members