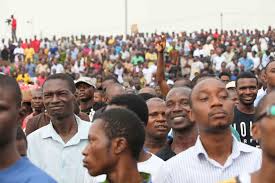 Nigerian youth under the aegis of Nigeria Youth campaign are demanding 30 per cent elective and appointive positions in the country.

Speaking yesterday in Abuja during the launch of its youth campaign website, campaign.ng, Founder of the group Comrade Uche Chuta said it was time for the Nigerian youth to have a representation in the political arena in the country.
He said the website was launched as a platform to enable young aspiring politicians express their intentions to contest as well as seek for the supports of other youth.  According to Chuta, young aspiring politicians “can also be enlightened about the political position they are vying for and develop themselves politically.”

Campaign.ng is a simplified – out of the box social media platform designed to enable youths join their voices in their quest to be leaders of tomorrow. They simply log on to the online platform www.campaign.ng, create a campaign, register as volunteers, make donations to support candidates or get the latest political related news as it pertains to youth.

Uche Chuta while unveiling the website in Abuja revealed that there was also a mobile application available for download for users. This app will allow users instant access to campaign.ng while on the go. “It’s important that we take full advantage of technology in this digital age. Grassroots politics can benefit from it.”

In his remarks, Sola Kuti a popular politician in Lagos state believed to be eyeing the Governorship under the platform of PDP expressed his belief that this was the future of politics in Nigeria. “It is technology driven, but easy to use and most importantly, it lowers the ‘cost’ of entry into politics especially for the youth whose primary challenge is funding. The idea will encourage youth participation and change the dynamics of Nigerian politics. Everyone keeps talking about a revolution but what we are unveiling here today is the evolution. The future is here.”

While thanking the media for supporting the event, Tosin Adeyanju said he believed that this platform will encourage youth to get involved in politics and begin to network ahead of the 2015 general elections. “The best answer to the problems of the youth, will come from within the youth themselves. This is one of them. A contribution to our generation. We must begin to help each other.”

Also in attendance were Anthony Ehilebo and Prince Tonye Princewill both touted as possible contenders for Governor in Edo and Rivers state.

“Does A Governor Whom Everyone Said Did Well, Lose His Ward?” Ekiti Results Frightens Fashola

PDP Can Never Win Rivers State, We Are Not Ekiti — APC Boasts