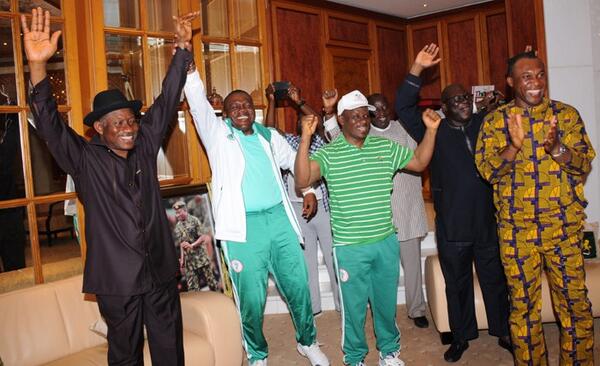 Super Eagles players who are aiming to beat Argentina tomorrow to top the Group F of the ongoing World Cup in Porto Alegre, are to get motivational messages from President Goodluck Jonathan today.

Nigeria Football Federation (NFF) board member, Emeka Inyama, confirmed monday that Jonathan was going to personally speak with the players as a way to motivate them against Argentina who struggled to gain maximum points from Iran last Wednesday.

Meanwhile, It was a smooth one hour, thirty minutes flight for the Super Eagles and its officials from Campinas yesterday to Porto Alegre, as the team gears up for tomorrow’s group decider against former World Champions, Argentina.

On the flight with the Eagles was the Vice President of the NFF, Mike Okeke Umeh, House of Reps members led by Vice Chairman, House Committee on Sports, Alhaja Ayo Omidiran, Coach Stephen Keshi and his crew and all the 23 players registered for the tournament.

The team is quartered at the Holiday Inn Hotel, about 10minutes drive from the airport and the good news for the team is that defence trojan, Godfrey Itama Oboabona, will be back in training yesterday afternoon. “I am ready to resume training today and the medics have given me a clean bill,” Oboabona said smiling as the team alighted from the TAM flight that brought them from Campinas.