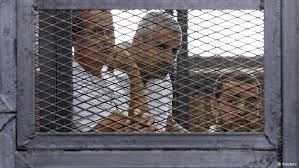 An Egyptian court has sentenced two Al Jazeera journalists to seven years in prison and another to 10 years, on charges including aiding the Muslim Brotherhood and reporting false news.

A judge delivered the verdicts Monday against Peter Greste, an Australian citizen; Mohamed Fahmy, a Canadian citizen; and Baher Mohamed, an Egyptian citizen. Al Jazeera has always rejected the charges against its journalists and maintains their innocence.

Greste, Fahmy and Mohamed were arrested in December in Cairo as they covered the aftermath of the army’s removal of Mohamed Morsi from the presidency in July.

The Muslim Brotherhood, which supported Morsi, was designated a “terrorist” organization by the interim Egyptian government shortly before the accused were arrested.

In the journalists’ case, the prosecution produced a number of items as evidence including a BBC podcast, a news report made while none of the accused were in Egypt, a pop video by the Australian singer Gotye and several recordings on non-Egyptian issues.

The defense maintained that the journalists were wrongly arrested and that the prosecution had failed to prove any of the charges against them.

“They just ruined a family,” said Fahmy’s brother Adel Fahmy, who was attending the session. His mother and fiancée broke down in tears. “Who did he kill” to get this sentence? Fahmy’s mother, Wafa Bassiouni shouted.

Adel Fahmy said they would appeal the verdict but added that he had little faith in the system. “Everything is corrupt,” he said. Greste’s brother Andrew said he was “gutted” and also vowed to appeal.

“The only reason these three men are in jail is because the Egyptian authorities don’t like what they have to say,” Amnesty International said in a news release. The group’s observer at the trial, Philip Luther, said the prosecution “failed to produce a single shred of solid evidence linking the journalists to a terrorism organization or proving they had falsified news footage.”

“Consigning these men to years in prison after such a farcical spectacle is a travesty of justice,” Luther said. “The Egyptian judiciary has proved time and time again that it is either unwilling or incapable of conducting an impartial and fair trial when it comes to those perceived to support the former president.”

In addition to the Al Jazeera journalists sentenced Monday, Egypt convicted a group of 16 Egyptians accused of being Brotherhood members, some of whom were tried in absentia and who now face up to 25 years.

A separate Egyptian court sentenced another 80 or more supporters of the Muslim Brotherhood to life in prison on Monday on charges ranging from murder to hindering police and blocking streets,

“Today three colleagues and friends were sentenced and will continue behind bars for doing a brilliant job of being great journalists,” Anstey said in a statement. “There is no justification whatsoever in the detention of our three colleagues for even one minute. To have detained them for 177 days is an outrage. To have sentenced them defies logic, sense and any semblance of justice.”

Secretary of State John Kerry, who on Sunday made a surprise visit to Egypt to meet with Egyptian President Abdel Fattah El Sisi, called the sentences “chilling” and “draconian.”

“Injustices like these simply cannot stand if Egypt is to move forward in the way that President Sisi and Foreign Minister (Sameh) Shoukry told me just yesterday that they aspire to see their country advance,” Kerry said in a statement. “Today’s verdicts fly in the face of the essential role of civil society, a free press, and the real rule of law.”

U.N. High Commisioner for Human Rights Navi Pillay said Monday that Egypt should release the three journalists, and she condemned the country’s recent spate of mass death penalty convictions as “obscene and a complete travesty of justice.”

But the Egyptian government rejected those statements, saying the country was capable of governing without outside influence.

“The Egyptian Foreign Ministry fully rejects any state or foreign party to intervene in the internal affairs of either the Egyptian state or to question the independence of the Egyptian judiciary,” it said in a statement.

Sudanese Woman Freed From Death Row, Re-arrested At The Airport With Family Members