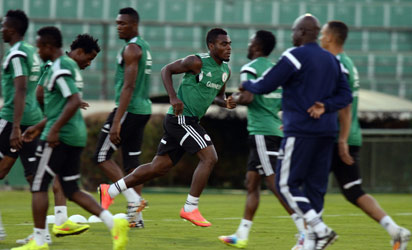 Sports enthusiasts have expressed confidence in the ability of the Super Eagles to win their second game against Bosnia-Herzegovina in the ongoing 2014 World cup in Brazil.

The Super Eagles will lock horns with Bosnia-Herzegovina in their second Group F match on Saturday, June 21. Coach Stephen Keshi has declared that the Super Eagles are set to crush the Bosnia team when they trade tackles today by 11:00PM local time.

Even though, Bosnia-Herzegovina made their FIFA World Cup debut when they lost 1-2 to Argentina in the first Group F match on Monday, the Eagles are in a match they must win.

With the divisions and continued disagreement between players and Coach Stephen Keshi after the Match with Iran, do you think the Super Eagles have what it takes to crush Bosnia today?

Today’s match will be the first ever game between Nigeria and Bosnia-Herzegovina. Nigeria have won four, lost four and drawn once against European sides at the World Cup.

Let the game begin with your predictions, wishes and more…