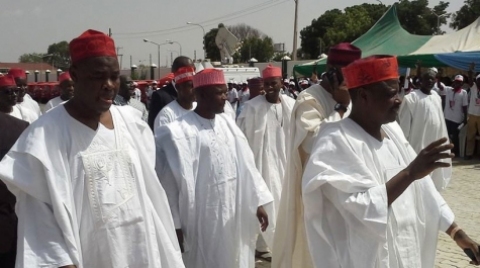 The claim by the All Progressives Congress, APC, that federal officials prevented the plane carrying the Kano State governor, Rabiu Kwankwaso, from landing in Akure is false, PREMIUM TIMES can reveal.

At the time the APC was claiming that the Kano governor was being barred from getting to Ekiti, the spokesperson of the governor told PREMIUM TIMES his boss was in Kano and had no plans to travel to Ekiti.

The APC, in a statement by its National Publicity Secretary, Lai Mohammed, claimed Mr. Kwankwaso and two other APC governors, Adams Oshiomhole of Edo and Rotimi Amaechi of Rivers, were barred from getting to Ekiti to support Governor Kayode Fayemi’s re-election bid.
“At least three Governors – Adams Oshiomhole of Edo, Rotimi Amaechi of Rivers and Rabiu Kwankwanso of Kano – have so far been prevented from making the trip,” Mr. Mohammed said.

The spokesperson added that “the helicopter that was to ferry Governor Oshiomhole from Benin to Ado-Ekiti was refused permission to take off from the Benin Airport, while the plane that was flying Gov. Kwankwanso to Akure was denied permission to land”.

Ekiti has no airport and so travelers by air have to first land at Akure (neighboring Ondo State) airport, then travel by road to Ekiti.

When the news of the denial first spread on Thursday, PREMIUM TIMES called the Director of Press Affairs to Mr. Kwankwaso, Baba Dantiye, who said his boss had no plans to travel to Ekiti.

Mr. Dantiye said Mr. Kwankwaso was at an event in Kano State and had no plans of traveling to Ekiti State.Kwankwaso 5

“The governor is in Kano here; he did not have plans of going to Akure, none that I know of,” Mr. Dantiye said.
Perhaps realising that his party had released a statement to the contrary, Mr. Dantiye called back to say he was at an event with the governor and would not “want to confirm or deny” the APC’s claim.

PREMIUM TIMES learnt that the event the Kano governor attended in Kano on Thursday was the graduation of 1120 mechanics and vulcanisers from the 44 local governments of the state.Kwankwaso event 2

Supporters of the governor posted pictures of the event on facebook.
Not all lies

The governor was then detained by soldiers for several minutes before he was allowed to return to Akure but not to Ekiti to campaign for Mr. Fayemi in the Ekiti election that holds on Saturday.

“Governor Amaechi was ambushed and refused entry into Ekiti by military personnel acting on orders from above. He made to turn back and return to Akure where his chattered aircraft was parked but was chased and rounded by armed soldiers and security personnel in Odudu, Ondo state. According to the captain who led the operation, he had orders not to allow the governor entry or exit,” the Rivers State Commissioner for Information and Communications, Ibim Semenitari, said.

Mr. Ohiare said he was informed of the air travel ban by the Commander 81 Maritime Crew, Benin City.

The spokesperson of aviation agencies had told PREMIUM TIMES that the military had the power to regulate Nigeria’s airspace even without the permission of the civilian agencies.
Military reacts

When contacted on why soldiers detained Mr. Amaechi, the spokesperson of the Nigerian Army, Olajide Laleye, denied that the incident occurred.

“That’s ridiculous, on what grounds? How could the military have arrested the governors? That’s not true, there was no arrest,” Mr. Laleye, a Brigadier General, said.

The military and the Nigerian Police have pledged to ensure security during the Ekiti election; but have been accused of aiding Nigeria’s ruling Peoples Democratic Party, PDP.

The three major candidates in the election are Mr. Fayemi of the APC, Ayo Fayose of the PDP, and Opeyemi Bamidele of the Labour Party.
But Governor Amaechi himself confirmed to PREMIUM TIMES that he was detained by soldiers who barred him from traveling to Ekiti. His aides later said he was released and allowed to return to Akure but that his plane remained impounded.