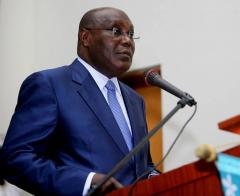 Immediately I heard that Nigeria’s former Vice President, Alhaji Atiku Abubakar has gone back to eat the food from the same pot he had rejected, my first reaction was “This is politics, where there is no permanent enemy and friend, but, what is constantly permanent is interest”! If not politics of “permanent interest”, how can one explain the unfathomable rationality behind the decision by Alhaji Atiku Abubakar to go back to Senator Bola Ahmed Tinubu-controlled All Progressives Congress (APC), looking at what the later did to him during and after the 2007 Presidential Election, when he took political refuge in the tent of the defunct Action Congress (AC), while running away from a persecuting boss in the PDP!

Honestly speaking, it was Alhaji Atiku that made the then AC a national party when he moved his remaining political associates in all the political parties including the Peoples Democratic Party (PDP), All Nigerian Peoples Party (ANPP) and the Alliance for Democracy (AD) where Senator Bola Tinubu, then Governor of Lagos State was the only AD Governor that survived former President Olusengun Obasanjo’s clampdown on the party’s dominance in the South West Geo-Political Zone in the 2003 General Elections! Some commentators were of the view that, Chief Obasanjo decided to clampdown on the dominance of AD in the South West region, because he wanted to prove a point to his political benefactors who accused him of outright rejection by his people in the 1999 General Elections, but, only to ride on their back to power in the said election year. So, based on that reality coupled with the atmosphere of uncertainties hanging over the their political future in the 2007 General Elections, there was a compelling need for Tinubu, being the remaining AD Governor and Alhaji Atiku Abubakar cum the retinue of his supporters in PDP who were denied registration during the 2006 PDP membership revalidation and registration exercise to find a new political home! At the beginning, their new political party was named the Advanced Congress of Democrats (ACD)! But, when the factions of the various political parties in the country joined the alliance, the name of the party changed to Action Congress (AC).

Even when the formation of AC was greatly influenced by Alhaji Atiku Abubakar, it was the same Atiku that popularized the party across the lengths and breaths of the country. In fact, I remember in 2007 when I was contacted by the party’s governorship candidate in Enugu State, Chief Dubem Onyia to mobilize youths and students of tertiary institutions in Enugu State to Akanu Ibiam International Airport Enugu, so as to welcome Atiku Abubakar who was coming to the state for his Presidential Campaign! At the campaign rally which took place at the Nnamdi Azikiwe Stadium Enugu, Senator Tinubu was never among those on Atiku’s campaign train, rather, it was Atiku and his running mate, Senator Ben Obi, former PDP National Chairman, Chief Audu Ogbeh, former Minister of Foreign Affairs, Chief Tom Ikimi among other notable politicians that graced the Enugu rally and the subsequent ones I personally monitored during the 2007 Presidential Election. Why some of us supported Atiku then, was because we felt that, he was unjustly persecuted by his boss! But, since he has failed to understand, that, there is a time for everything under the sun and have decided to go against this unchanging law of nature, which is binding on every creation, and have also decided to challenge the Biblical “David of our time”, which is President Good Luck Ebele Jonathan, some of us are beginning to question the rationale behind his unflinching avarice for power or in the words of Simon Kolawole of Cable Newspaper, his “…Eternal Obsession with Aso Rock”.

To cut the whole story short, some of us are aware of what transpired between Atiku and Tinubu during the 2007 Presidential Election; and how Atiku became the lame duck of the Action Congress (AC) after the General Elections, just because he could not install an AC governor in his home state of Adamawa and the then outgoing governor of Lagos State Senator Bola Ahmed Tinubu was able to install his then Chief of Staff, Babatunde Raji Fashola as the governor of Lagos State. Tinubu and his loyalists including Alhaji Lai Mohammed who once described Alhaji Atiku as the “Bulwark of Nigerian Democracy” decided to sideline him in the party where nobody heard anything from him until he tendered his resignation letter and joined the ruling PDP. So, because of Atiku’s inexplicable quest for power, he decided to return to his former party, the ruling People’s Democratic Party (PDP) where his political wings were clipped by President Good Luck Ebele Jonathan at the party’s primary. (This Jonathan dey toughooo)! Also, because of the intimidating mass appeal President Good Luck Jonathan still enjoys in the PDP and in Nigeria at large, Atiku decided to chicken out by going back to his estranged political ally, Senator Bola Tinubu who I must commend for re-inventing opposition politics in Nigeria! Hence, the recognition given to him by Thisday Newspaper as the “Man of the Year” is never in vain, but, a well deserved honour!

Finally, by now I think Alhaji Atiku should have started using his stupendous wealth and experience in politics to groom the younger generation in the country for leadership rather than still spend his time, energy and resources chasing the white geese which he can never get again, because, in the theatre of life, the race is not always to the swift, nor the battle to the strong… but, time and chance happen to them all. Therefore, instead of going for another bloody nose from President Good Luck Jonathan, I strongly advise that, he honourably retire from active to passive politics in 2014, before President Jonathan disgracefully retire him from active politics in 2015 if at all he succeeds in snatching the APC Presidential ticket from General Buhari!