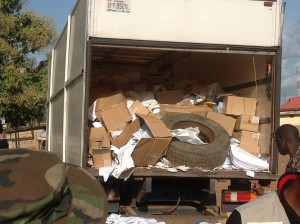 Men of the Nigerian Army deployed to monitor the June 21 governorship election in Ekiti State  Thursday arrested a truck loaded with the Independent National Electoral Commission (INEC) ballot papers at an undisclosed location in the state. 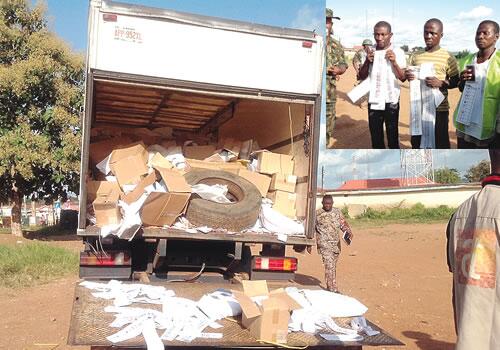 Briefing the press in Ado-Ekiti Thursday on the development, the commander of 32, Artillery Brigade, Akure, Brig-Gen Aliyu Momoh, who made the disclosure also threatened that whoever is caught with dangerous weapons would be brought down by his men.

The truckload of fake ballot papers was intercepted by soldiers at Ita Awure on the Ilesha-Ado Road in Ekiti State and they immediately impounded the truck, marked Adewole F. Odunayo Enterprises, and equally arrested the two occupants of the truck.
The gubernatorial candidate of the Peoples Democratic Party, has called for thorough investigation of the incident.

The gubernatorial election in Ekiti State is scheduled for June 21. Investigation is said to be ongoing ascertain those culpable for the fake ballot papers.