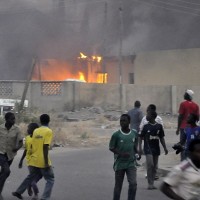 A bomb explosion has ripped through drinking centre in Kano state, Northern Nigeria and 10 persons have been confirmed dead, many others injured.

The blast is said to have occurred around 9.30pm on Sunday evening.

The car bomb ripped through the crowded entertainment spot in the north Nigerian city of Kano on Sunday, witnesses said.

The blast on a busy road lined with bars in the predominantly Christian area of Sabon Giri, could be heard several kilometres (miles) away, locals said.

The centre is a popular drinking spot in Sabongari area in Kano and Eyewitness account puts the number of those killed at 25 but the figure is yet to be confirmed.

We shall be following the story and keep you updated.

Boko Haram Prisoners To Be Released In Exchange For Abducted Schoolgirls