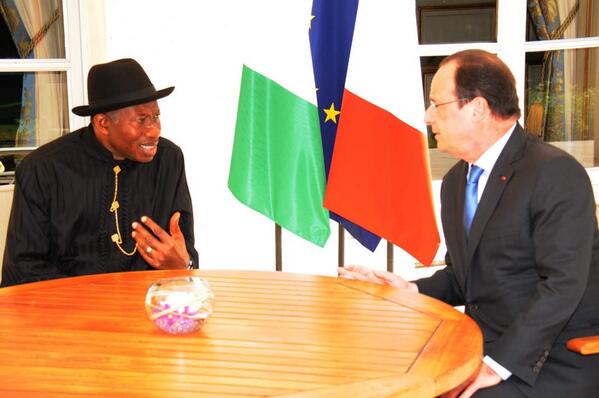 Following the widespread criticism over the cancellation of the president’s visit to Chibok one month after the over 200 girls were abducted from Government Girls Secondary School.

President Goodluck Jonathan has  said his visit will not “solve the problem”. In an interactive session with Journalist at the Africa Security Summit in Paris, President Jonathan said “if the president goes to Chibok today, it does not solve any problem; may be psychological problem or for media relevance. But you have not solved the problem” insisting that “the problem facing the president and indeed the Nigerian government is how to get this girls from where they are” he said.

Jonathan added, “these girls are from a particular school, but there are a lot of misconceptions; these girls have been removed from the school” insisted that “visiting the school per se does not solve the problem”.

“They (girls) are not from one family, they are scattered from a particular local government area, which is made up of so many communities. So there is no one family that you will go and visit” he said.

He maintained that it remains the “commitment of the federal government to rebuild that school and provide facilities to protect it since it is a school that predominantly takes care of school education so that the girls will be protected”.

He however noted that he will visit Chibok “no doubt about that” but noted that it is unlike the some bomb blast situations where he visited the scenes, insisting that “our interest now is to locate the girls; to know where they are. These girls are not held in Chibok”

President Jonathan also dismissed allegations that Cameroon have not been helpful in the fight against Boko Haram insurgents, insisting that “Nigeria has a robust relationship with Cameroon”.

Security: “Terrorists Will Not Be Allowed To Define Who We Are” – Jonathan In Paris