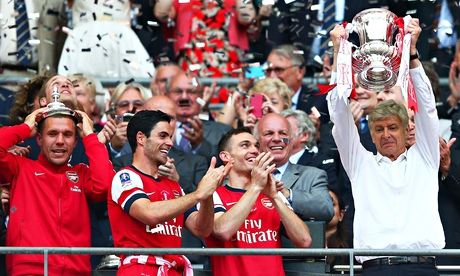 Arsène Wenger described Arsenal’s 3-2 victory over Hull City in the FA Cup final as a “big moment of happiness”, and even went as far as to suggest that the club’s first major piece of silverware in nine years was the most important in his time at the club.

Arsenal had to show all their fighting qualities on a sapping day at Wembley, after finding themselves 2-0 down inside eight first-half minutes, thanks to goals from James Chester and Curtis Davies. Wenger admitted feeling “shock” at the blistering start made by Steve Bruce’s side and fearful that his “nervous” players would not overcome the setback.

However, Santi Cazorla’s rasping free-kick after 17 minutes got them back into the contest before a much improved second-half display resulted in Laurent Koscielny equalising for Arsenal after 71 minutes, and Aaron Ramsey securing the winner in extra time.

“I feel relief and happiness because we were under severe pressure to win today and didn’t start well,” said Wenger. “But, in the end, it finished well, so this is a big moment of happiness for us.

“We waited a long time for this and the happiness is linked sometimes with the suffering, and the time that you have to wait.”

Branded a “specialist in failure” by José Mourinho earlier in the season, Wenger now joins Sir Alex Ferguson in having won the FA Cup five times as a manager. Yet, for him, this triumph has a resonance beyond that because it meant the club finally followed up on their success in the final of 2005’s FA Cup competition, when Arsenal beat Manchester United 5-4 on penalties to claim the trophy. That was the seventh major honour of Wenger’s reign, a spell that, at that stage, also included two Doubles.

“This was more important than all the others,” said the Frenchman. “We have twice won the double, but were not under pressure then like we were today.

“This is an important moment in the life of this team; to lose today would have been a major setback, but winning gives us a good platform to come back stronger next year.”