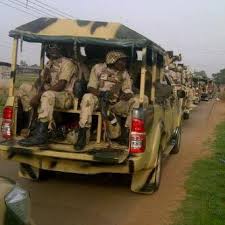 JIC/CTC/NE/14                                                             9 May 2014
PRESS RELEASE
DHQ FAULTS AMNESTY INTERNATIONAL’S REPORT ON CHIBOK
The allegation by Amnesty International that the military authority was informed of the impending attack but failed to nip it in the bud is very unfortunate and untrue.  Much as the Nigerian military appreciates the global concern and show of solidarity with the country at this trying moments, falsehood should not be introduce as a means of assessing the situation.  It has to be categorically stated that the claims by Amnesty International in its report that security forces had advance warning about the abduction of students of Government Secondary School Chibok, Borno State by terrorists is unfounded.
Contrary to the organisation’s claims, troops in Maiduguri did not receive four hours forewarning about the attacks.  Rather, they received information of an ongoing attack on Chibok community from troops on patrol who on noting the attack engaged the terrorists and called for more reinforcement to contain them.
As the troops on reinforcement traversed the over 120km rugged and tortuous road from Maiduguri to Chibok, they ran into an ambush by terrorists who engaged them in fierce firefight and a number of soldiers lost their lives. Another set of soldiers also mobilized for the mission arrived after the terrorists had escaped due to a series of misleading information that slowed down the pursuit.
It must therefore be clearly stated that contrary to the claim by the Amnesty International, the information received by troops at the Division Headquarters in Maiduguri was not a forewarning but the call for reinforcement by troops on patrol.  Considering the vastness of the mission area, deployment has been more of patrols than static.
The imputation of cowardice on the part of troops is particularly confounding as the military has internal mechanism to deal with such tendencies.  These spurious allegations are obviously a continuation of the campaign intended to cause disaffection, portray the military in bad light and undermine the counter-terrorism efforts.
Although the Chibok incident is still subject to more investigation, the Defence Headquarters appeals to individuals and organisations to refrain from circulating spurious allegations that could undermine both the operation and investigation of conduct of the mission generally.
CHRIS  OLUKOLADE
Major General
Director Defence Information/Coordinator