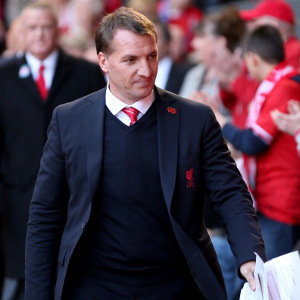 Liverpool manager Brendan Rodgers remains confident he will be able to keep his players focused against Norwich City as they attempt to take another step towards the Premier League title.

The Reds are currently top of the table and know that if they win their remaining four games they will be crowned English champions for the first time since 1990.

With Manchester City drawing 2-2 against Sunderland on Wednesday, the sense of anticipation at Anfield has increased even further, but Rodgers insists his players are simply focused on Sunday’s match against strugglers Norwich at Carrow Road.

“We never look too far ahead – that’s key in order to manage that expectancy,” said Rodgers.

“It doesn’t matter about Chelsea, Crystal Palace or Newcastle now – we have to do the job against Norwich.

“We focus on our performance level and that takes our mind off a lot of the other external factors and background noise that may come across your way.”

The Northern Irishman added: “Norwich have changed the shape of the team. They played a diamond last weekend and they created some chances.

“It’s been difficult for them this season, but we don’t underestimate them. We’ll respect them and know that they are a threat.”

Liverpool will be without Jordan Henderson, who will serve the first game of a three-match ban against the Canaries after he was sent off against Manchester City, with Joe Allen likely to deputise in midfield.

The Reds will give a fitness test to striker Daniel Sturridge after he suffered a hamstring injury against City which may force Rodgers into a change of formation.

The Uruguay striker has scored 11 goals in his last four appearances against Norwich, including four in this season’s reverse fixture at Anfield.

“Luis is remarkable in his performance level,” Rodgers said. “I saw the three goals that he scored at Carrow Road before I came in and he’s hit three and four in single matches during my time here against Norwich.

“But I take more solace in what we do as a team. Luis has scored a large part of his goals up there on his own. He enjoys that role and the freedom and the space that it offers him.

“Thankfully, we’ve got other players in the team who can score goals. He’s been fantastic and he will continue to be.”

Meanwhile Norwich manager Neil Adams believes his side, now just two points above the relegation zone, can pick up points against all the odds.

The Canaries face a nightmare run-in with their final four matches against Liverpool, Manchester United, Chelsea and Arsenal.

But Adams, whose first match in charge since replacing the sacked Chris Hughton was a 1-0 defeat by relegation rivals Fulham last week, said: “We have four massive games against top class opposition and we know 32 points (Norwich’s current tally) won’t be enough. I am pretty sure of that.

“These last four are going to be very tough and people may feel we have the most difficult run-in of the lot but we are confident with the same effort and approach we showed (at Fulham) we will pick up points.

“It is a huge advantage to be out of the bottom three. There is pressure on Fulham to get out of it, but we know how perilously close we are. We cannot hide away from that fact,” he added.

“We have to get ourselves up and away from it and we need a bigger gap on the three (teams) below us.”

Sani Kaita On A Three Month Loan Deal With Enyimba