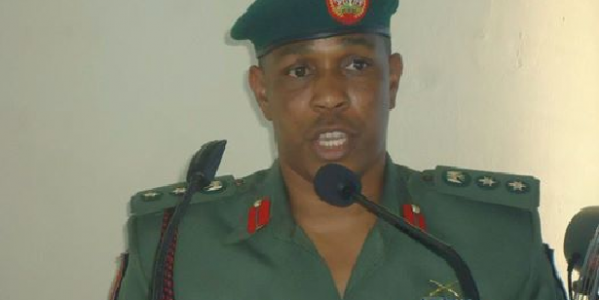 A man is wearing black, black shoes, socks, trousers, lumper gloves. He is walking down a black street with all the street lamps off. A black car is coming towards Him its lights off but somehow manages to stop in time. How did the driver see the man?

An in-depth analysis of that interview shows a lot of loopholes and I was quite surprised that the VOA allowed the interview sail in the first place. If one asked me the sum totality of the interview was tailored towards promoting Boko Haram and maligning the army. Very quickly let me add, I do not believe the character that was interviewed and that is my opinion.

However my admonition though is not about that interview. But sundry yet important events in our war against insurgents, herdsmen, terrorists, cattle rustlers, kidnappers, ritualists, all in the light of the Nigerian armed personnel.

Before I go far, let me say that in all the battles and warfronts, the Nigerian armed forces, the police (which these days are awol), the State Security Services and other security personnel have been compromised. There are moles, double agents etc, so a hard task is made even harder.

And while this essay does not serve as a defense, I present a few issues with the story of Col. Kabiru Salisu, one that my readers are not obliged to believe too, but it is true, and I have taken pains and time to investigate it, and because there are many Col. Kabirus in the Nigerian security apparatus

Kabiru was a respected troop commander, a fine gentleman and officer par excellence; he left behind two wonderful kids, a loving wife. He was killed in an ambush.

Kabiru would go to Camerounian heights to get across family and friends due to network restrictions. He was fighting insurgents for a better Nigeria. Having only been promoted to full colonel in November 2013 and posted from Jaji in Kaduna state to Borno state, the Boko Haram enclave

He was already fatigued; he had spent 91days on combat uniform. We might say he signed for it, but he was cut off in his prime.

Imagine the pain his parents in Kaduna must be going through, I wonder how they must be feeling. Salisu was Muslim, and he was killed! On his phone the status read—The originator of heavens and earth. When he decrees a matter. He only say unto it. “Be-and it is”

Strangely I never knew this fine gentleman and officer

They said, “Mocking bird, you are accused of insulting the king.” It asked when would it have time to insult the king, seeing that it must sing two hundred songs in the morning, two hundred in the afternoon, and two hundred at night, mixing it all up with some frolicsome notes?

The APC in which Salisu died is a battle troop transport vehicle which the army use and many believe should protect them from artillery attack, however Boko Haram fire-power was able to set the APC on fire, killing the Commander and other troops in the vehicle, raising fears as to the safety and efficacy of the equipment at the disposal of the Nigerian army.

Much of the army equipment today is outdated, due to an allergic history of government corruption, with vehicles used having been purchased since the Shagari regime in the early 80’s. The government is more interested in acquiring private jets; which the current president has a few of, and has a budget currently awaiting approval for another.

Kabiru loved his job, and loved his nation, I gathered that pressure was so much that when he was posted to Maidugiri he was asked to leave earlier than scheduled. On his way to Maiduguri from Yola, they were ambushed but escaped.

He is one of many soldiers that have paid the ultimate price, Muslims, Christians, pagans, inclusive.

I have been opportune to see how poorly armed these soldiers are, at almost a ration of 2:8 in comparison to Boko Haram when bullets are counted. Yet they fight on, we have issues of poor allowances; we have reported delays running into years before benefits are paid to families of deceased officers.

What do we tell his Kabiru’s kids, Kariri and Bubu, they are one of the many such children whose gallant soldier parents have died so that you and I reading this can live.

It is rather sad that in the midst of all these killings, Nigerians are battling each other along religious and ethnic lines. Like the Mocking bird making unnecessary excuses and noise.

Kabiru, according to sources was loosing weight, and his response was “If my soldiers don’t sleep, how can I sleep, we are here planning and planning.”

His soldiers are of different ethnic stock; diverse faith and what else can one add, than, is it really fair for Christians to accuse Soldiers, or Muslims to accuse the Army of plotting to eliminate them.

But ultimately, we are all visitors to this planet, from God we come and to Him we return.”

Opinion: Nigerian Presidency, The British And The Invention Of Boko Haram

Olusegun Adeniyi: Another Season of Blood and Tears