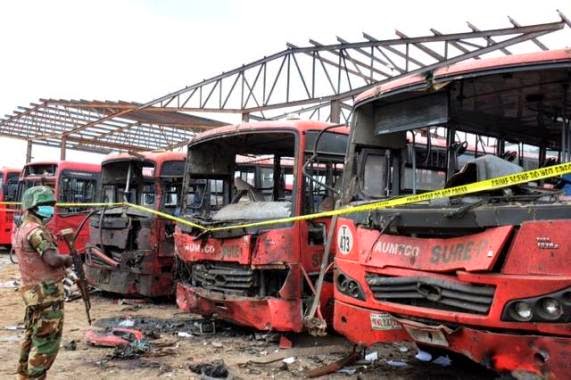 The Christian Association of Nigerian-Americans, CANAN, say the Nyanya Bomb blast was meant to kill Christians especially as the world entered into the Passion Week leading to the Resurrection Sunday, Easter celebrations.

The group say the 16 luxury buses and 24 mini-buses had intending passengers to be transported people to work and some were headed South when the terrorists set the buses ablaze in several explosions.

Statement signed by’Laolu Akande, the Executive Director CANAN reads, “Initial indications are that those targeted in this barbaric attack included several Christians who were traveling to observe the Easter holidays with friends and family. Now and again, families who had expectations of a happy reunion during this time of Christian celebrations are being forcefully fed this cup of sorrow.”

The group, condemning the killing of Christians say that two Borno State villages, home to many Christians over 38 Christians had been killed by the terrorists.

“We share in the pain of the relatives of the victims both the dead and the injured and we demand from the federal government a serious and effective solution to curb is rising wave of terrorism and violence in the land” Statement continued.

“Three states in Northeastern Nigeria has become the hotbed of Boko Haram attacks in recent times and now the attack of a town close to the capital of the country at a time and season such as Easter is another proof of the major underlying target of Boko Haram terrorism.”

CANAN further frowned at the unrelenting acts of the terrorists to take human life so wantonly, but also at increasing failure of the constituted authorities in Nigeria to protect life and property.

CANAN insists that the Nigerian authorities must work harder to protect the freedom of Nigerian Christians to practice their faith.

“We agree with the Secretary-General of the United Nations Ban Ki-moon that ” the perpetrators of this attack and those responsible for the continuing brutal attacks in the northeast of the country, must be brought to justice. ”

“We again reject the argument that poverty is the main cause of these attacks and hope those making that argument will consider the prevailing poverty in other parts of the country which has not degenerated to the kind of wanton violence we set perpetrated by Boko Haram. Poor people sure needs developmental efforts, but poor people can afford the resources maintaining this prolonged insurgency.”

“We reiterate our call to the US government to expedite its plans to help the federal government in better managing this situation so as to preserve the lives of innocent Nigerians who are being killed maliciously.”

CANAN promises to work actively with the Christian Association of Nigeria, CAN, to address pertinent areas of concern and welfare of its members and the nation.

Over 200 School Girls Kidnapped By B’Haram In Borno