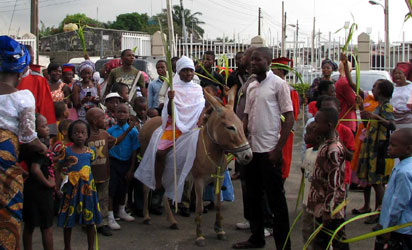 Christians in Abuja on Sunday joined other faithful around the world to mark the feast of “Passion Sunday’’, also known as “Palm Sunday’’ with a call on Nigerians to embrace peace.

The News Agency of Nigeria (reports) reports that unlike in the past, some of the processions in this year were held around Church premises to enhance the safety of worshippers.

Palm Sunday or Passion Sunday, according to the teachings of the Church, marks the beginning of the Holy Week, the climax of the Lenten season.

It is a commemoration of the triumphant entry of Jesus Christ into Jerusalem, in preparation for his suffering and death on the cross.

The event is marked by processions by both the clergy and the congregation, seen carrying palm fronts amid praises and songs.

NAN reports that special Church services were held with faithful participating in the traditional procession, carrying palm fronts and chanting hymns, to mark the day.

At St. Peter-Clavers Chaplaincy, University of Abuja Staff Quarters, Giri, the faithful were seen in processions before moving to the Church hall for service.

In his sermon on the occasion, the officiating priest, Rev. Fr. Augustus Essien, advised Christians to imbibe humility, selflessness, peace and love for neighbour, as exhibited by Jesus Christ in his passion and death.

He said Jesus Christ’s passion and death on the cross was a perfect example of God’s love for man in spite of man’s stubbornness and disobedience to his commandments.

He urged Christians to always be guided by peace, “which is the true lesson of Jesus passion and death on the cross’’ noting that Nigeria was in dire need of peace.

At the St. Charles Lwanga Parish Apo, Abuja, Christians moved a few metres around the Church premises and back into the Church hall for the service.

In his sermon, the Assistant Parish Priest, Rev. Fr. Emmanuel Onuma, urged Christians especially those in positions of authority to be selfless in their service to the nation.

He said that the message of `Passion Sunday’’ was sacrifice, selflessness and endurance, which Christ exhibited for the redemption of mankind.

“God has called you to be an instrument of liberation for the needy, step out of your comfort zone and save others.

“I know it is not an easy task, but if you are determined to do it, God will give you the grace and strength to accomplish it,” he said.

At Christ the King Catholic Parish, Kubwa, Abuja, the situation was the same as faithful were seen gathered at the entrance of the Church with traditional attire to mark the event.

The officiating priest, Rev. Fr. Daniel Bot, told Christians to reflect on the teachings of Easter, particularly the lessons of Christ’s passion.

Reading from the Gospel of Matthew 21, Bot said that Christ taught his followers to exhibit humility in all their endeavours.

He said that Jesus Christ as King of the Jews chose to ride on a donkey rather than a horse like his contemporaries did during His time.

“The entrance of Jesus into Jerusalem on a donkey symbolised his humility and simplicity as a King, and this is what all Christians are urged to exhibit in their various callings,” he said.

He said that though it was often difficult for one, especially those in high places, to sacrifice their comfort for others, such service was necessary for the work of salvation to be completed.

Bot said that Easter was very important in the lives of Christians, noting that without Christ’s submission to the will of God, the plan of man’s salvation would have been incomplete.

At the St Matthews Anglican Church, Gwarimpa, the Vicar, Canon Ephraim Akanya, in his sermon, also urged Christians to be sober in their reflections during the holy week.

Akanya said that the biggest message of Passion Sunday was that of peace adding that laying of palm branches on the streets for Christ to ride signified peace.

He said that in spite of the suffering that Christ went through, he still called on his people to follow the path of peace, righteousness and sacrifice.

14-Year-Old Bride, Wasila Umar, Explains Why She Poisoned Her Groom